Standard White - 100%
“Looking for something sturdy and reliable? Sometimes the car you need isn't the one you came in to buy. It's like going to the pound and being drawn to the old dog with three legs, one eye, and a real bad compulsion to hump anything that moves. If you can convince yourself that everyone is saying "ew" and "wtf" because it's just so gosh-darn adorable, the Warrener HKR is all set to be a companion for life.”
— Southern San Andreas Super Autos description.

The Vulcar Warrener HKR is a light pick-up/utility vehicle featured in Grand Theft Auto Online as part of the Los Santos Tuners update.

The vehicle is primarily based on a Nissan/Datsun Sunny pick-up truck with a Skyline C10 GTR front transplant, also known as a Hakotora, which is where the "HKR" from the Warrener's name came from.

The vehicle is essentially a pick-up/utility variant of the Warrener, where the front section retains most of the features from its 4-door counterpart, albeit with black housings and larger headlamps, with the inner ones being high-beam lamp. The rear section, however, has been altered for the small load bed, which features black panellings similar to the Yosemite, a small tailgate with the Vulcar emblem on the centre and a black handle on the driver side, and vertical tail lamps with black trim around, each consisting of the upper turn signals, middle main/brake lamps and lower reverse lamps. The lower portion lacks a dedicated bumper and has a number plate attached to the centre. A single exhaust muffler and tip can be seen on the driver side. The interior of the car is also shared with the regular Warrener.

The primary colour of the car is applied on the body, while the secondary colour is applied on the interior stitching. A trim colour is also available, which seems to be only applied to the custom seats available as modifications, as well as a dial colour. It uses a set of rims similar to the "Azreal" muscle rims available in Los Santos Customs, wrapped in medium-profile tyres with narrow width and slightly larger profile than the custom wheels. These rims can also support a dedicated colour, although only naturally-generated examples from Content Creator may have one.

The vehicle performs similarly to its 4-door variant, having a high acceleration and a good top speed for the class, but the high torque makes it prone to spinouts, requiring careful driving to maintain traction. Its handling is responsive and quick due to the car's light weight and excellent braking. Crash deformation is poor, but the engine can take several direct hits before failing. Compared to the regular version, the Warrener HKR has a slightly higher top speed and a lighter weight.

The vehicle is powered by an inline-4 engine, coupled to a 5-speed gearbox and powering the rear wheels. The engine sound appears to be a higher-pitched variation of the one from the regular version. 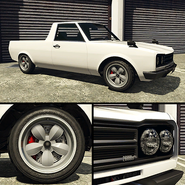 The Warrener HKR in the cinematic preview on Rockstar Games Social Club.

Warrener HKR badge from the advert.