“The legendary Swedish four door sedan. All the boxy design of a 1980s Vulcar, with none of the reliability. For lovers of tight jeans, micro breweries, and 70s cop shows.”
— Southern San Andreas Super Autos description.

The Warrener is implied to have a Swedish origin, but it draws most of its traits from Japanese vehicles. The Warrener is heavily based on the Japanese designs of the Nissan Skyline GTR KGC10, Datsun 510 (Bluebird), and the first year of the Toyota Corolla KE70. It also seems to draw some inspiration from the 1960's-70's Saab 99. The car's front fascia is a heavy mix of those from the Peugeot 504 and Nissan Skyline C10. The chassis brings a mixed resemblance from the Datsun 510 and Volvo 144, while the sideview mirror placement bears resemblance from the Toyota Century, and as well as the headlamps taking cues from the pre-facelift Hyundai Pony.

The Warrener assumes a traditional sedan layout with a somewhat sporty appearance, where the front features a chrome bumper with two plastic vertical sections and a central license plate, while the upper area features dual open vents and a chrome detail surrounding the black grille and the headlamps. The grille has a smaller chrome surrounding and bears the Vulcar logo on the centre and a "2600lx" badge on the lower driver-side corner, while the headlamp housings are finished in chrome and have dual circular main lamps. The bonnet has impressed areas starting from above the grille and lead towards the small vents near the windscreen, which opens to reveal the engine bay and a strut brace over it.

On the sides, the car has flared wheel arches and chrome horizontal door handles, as well as black mirror shells mounted over the front fenders. The cabin area also features chrome trim around the windows, having coloured B-pillars and wide C-pillars. The roof is flat in appearance and has a small boot lid on the rear section.

The rear end of the car has a rectangular section bearing a central license plate, two chrome sections beside it for the plate lights, black sections and dual red square lamps with chrome details surrounding them. The bumper is also finished in chrome and has two black vertical details on it, while the exhaust tube can be seen on the driver side, just below the bumper. The car bears the Vulcar logo on the centre and the "Warrener" lettering on the right-hand side of boot lid end, along with "5 Speed" lettering on the left-hand side, just above the bumper.

Its interior and dials are shared with that of the Monroe, being also a derivative of the one from muscle cars like the Buccaneer and the Dominator. By default, the Warrener spawns in a variety of single-tone colours. However, via customization, its secondary colour is represented as a wide stripe passing through the bonnet, roof, boot and rear end. It uses a set of wheels similar to the Futo and the Youga, being the "Fujiwara" tuner rims seen in Los Santos Customs, wrapped in medium-profile tyres.

The Warrener has high acceleration and a good top speed for the class. Its potent 6-cylinder engine has the second-highest torque in the class, just behind the Super Diamond, but unfortunately this results in the car being prone to spinouts, requiring careful driving to maintain traction. Otherwise, the handling is responsive and quick due to the car's light weight and excellent braking. Still, addition of the spoiler mod is recommended to keep the car planted. Crash deformation is poor but the engine can take several direct hits before failing.

The vehicle is powered by a 6-cylinder engine in a front engine, rear wheel drive layout. True to what the badge suggests, a 5-speed gearbox is fitted, while the interior features an automatic transmission gear lever. With the "Intercooler" modifications installed, two turbochargers are fitted on a side of the engine, though they are just an aesthetic feature and do not improve the performance of the vehicle, unless the actual "Turbo" upgrade is installed. It shares the engine sound with the Rat-Loader and the Rusty Rebel, but with a cleaner tone.

In the Expanded & Enhanced versions of the game, the Warrener’s engine sound was changed to that used on the JB 700.

The Warrener on the original version of GTA V. (Rear quarter view)

The twin turbochargers fitted on the Warrener with the "Intercooler" modifications. 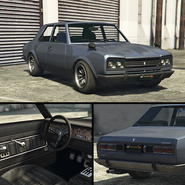 The Warrener on the updated Rockstar Games Social Club.

The Warrener in the cinematic preview on Rockstar Games Social Club.