Warehouses are purchasable properties featured in Grand Theft Auto Online added as part of the Further Adventures in Finance and Felony update. They are available to buy once the player registers as a CEO and buys an Office.

Buying a certain size of warehouse for the first time will also unlock a vehicle in the Organization Vehicle list with a request fee, or for free if the player owns one:

The layout of a Warehouse's interior depends on the size of the Warehouse that has been purchased. Small Warehouses only have one row of platforms to hold cargo, with the rest being left on the floor. In the medium-sized Warehouses, three rows of platforms are present to hold the cargo. The large Warehouses have four rows, but the platforms are much taller than the ones found in the small or medium Warehouses.

In order to start buying and selling contraband via the Special Cargo Network, the player must buy an Office, and then enter the Office and access the executive terminal in a public session. After doing so, the player must buy a Warehouse. Once the player has a Warehouse, they are able to initiate Buy and Sell missions. Initiating buy missions cost a certain amount of money based on how many crates the player wants to collect in one mission. This varies from $2,000 for one crate, $8,000 for two crates, and $18,000 for three crates.

For vehicle missions getting the vehicle is as simple as clicking the green "Source Vehicle" button which will find a vehicle for the player to retrieve.

After the player delivers crates to the warehouse, they must decide when to sell. The longer the warehouse sits with crates in it, the more likely it is to be attacked by a gang of NPCs. However, the player gets more profit when they sell more crates at one point in time. There is a short cool down on Buy missions, so doing them for three crates is recommended but isn't the best option at a financial standpoint, as it takes away from the profit from the sale price. The best way to relieve this is to do VIP Work in between, specifically Sightseer, where $24,000 is common and represents the lowest chance of dying in an empty lobby. This can increase your overall profit and make up for the decrease.

Each warehouse size category has a different daily fee, namely being $50 per day for small, $100 per day for medium, and $200 for large. With up to five different warehouses available to the player, one could choose to buy a single small one, five large ones or a mix of any size in-between to create a combined daily fee that is manageable for their personal playstyle or preference.

With effect from The Criminal Enterprises update, each warehose is staffed. The players first warehouse is staffed by Lupe and each of the other four warehouses are occupied by unnamed Warehouse Staff.

Buy missions are the missions the player does to get crates. Buy missions have a cool down on them, so doing the mission that gets the player the most amount of crates, three, is recommended. Buy missions are initiated in the player's office at the Securoserv terminal. An important thing to note is that a player can only pick up one crate, meaning they can't pick up two crates at the same time. However, one person can deliver a crate and then go back to grab another one until all the crates are gone. Buy missions must take place in a public session, so it is recommended to find a small session or make sure no one is going to try and destroy the crates or kill the player.

Note: Having more than one warehouse is one method of bypassing the cooldown timer on buy missions.

After The Criminal Enterprises update, players can also send their warehouse staff member to source random cargo for $7,500 each trip.

Once the player has obtained at least 1 item of special cargo, the player can sell it by using a laptop connected to the Ad-Hawk website located on a table near the warehouse's entrance. The CEO will sell the crates using one of three different approaches — by air, using either a Cuban 800 or Titan (dependent on the volume of stock being sold), by sea, using a Tug Boat, or by land, using from one to three Brickades (again dependent on the volume of stock being sold). The more crates being sold, the more players are required to help sell the cargo.

Selling a full warehouse has the benefit of earning more money per crate than selling an otherwise not full warehouse, but full warehouses comes with a risk of being raided by NPCs which causes crates to be lost. Also in lobbies with more people a percentage bonus is added for the risk over otherwise empty lobbies. Having more associates also gives extra bonus profit compared to selling stock solo with no associates.

The special item sells 5x of its costs, and unlike the normal products, the special items will not increase the value as the item number increases.

Associates do not currently get a share of this profit, instead they earn money on a time basis similar to VIP missions. Every time associates help to retrieve crates their pay is raised by $500, starting at $5,000 and maxing out at $10,000 every interval. They also get paid this amount after helping complete a delivery mission.

Sell missions involving aircraft can have a player as the copilot using the jammer that will detour incoming missiles.

Upon starting the "Selling Cargo" mission from a warehouse, the player have the option to upgrade all the vehicle's attributes to a certain extent using the blueprints in the warehouse. The following upgrades are:

Your warehouse can get raided by NPCs The raid mission types are Warehouse Assault and Recover Warehouse's content.

Deliver the mixed goods to Terminal

In-game time
“Hey, jefe. You wanted to move the stuff today, right? We got it all loaded up on the flatbed, right outside the warehouse. Only thing left to do is to take it down to the docks. And watch your back... I hear there's some players in town almost as ruthless as you.”
— Lupe's introductory brief

With The Criminal Enterprises update, players who own at least 1 Warehouse and has sourced special cargo via Lupe or other Warehouse Staff at least once are now able to start an Export Mixed Goods mission by speaking to the Assistant at the Office.

Upon starting the mission, the player is instructed to leave the Office.

A Flatbed has been parked outside one of the player's Warehouses, selected at random. The player is tasked with entering the Flatbed and delivering it to the drop-off point at Terminal, which shares the same location as the delivery point for Exotic Exports. Along the way, the player may be pursued by a random gang faction in 3 waves of 2 vehicles containing 2 enemies each:

Occasionally, no enemies will pursue the player, allowing for an unimpeded drive to the destination. It is also possible for the player to be ambushed by the police instead, resulting in a 3-star wanted level that must be lost before the delivery can be made.

“Jefe we got a problem. The cops were watching us the whole time. Youre[sic] gonna need to lose them before you deliver the stuff.”
— Lupe's text on police ambush

Once the Flatbed is delivered to the drop-off point, a small cutscene of the container being loaded into the Ocean Motion plays (identical to the Exotic Exports delivery cutscene), completing the mission and rewarding the player with $50,000.

“Looking good jefe. The boat is stocked, payment should be with you now. Lets[sic] go again soon.”
— Lupe's post-mission text

Upon completion of the mission, there is a 48 minute (1 in-game day) cooldown before another can be started. The player does not need to be registered as a CEO to start the mission. 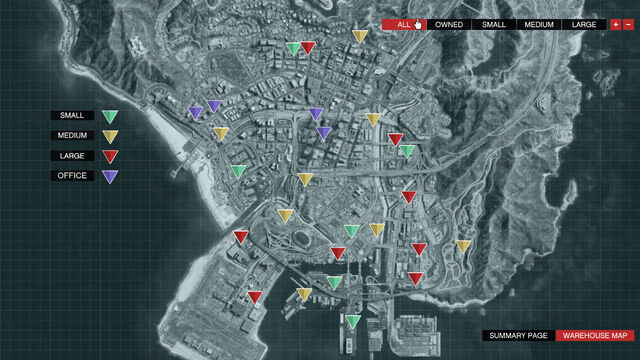