Waking Up the Neighbors

Waking Up The Neighbors

Victor Vance running over a Cholo in a Bobcat

Wasted
Busted
Cholos get away

O, Brothel, Where Art Thou?

Marty: "Them damn Cholos are trying to muscle in on my repo business! It's time I sent them a message..."
Vic: "Grenades?!"
Marty: "I just wanna make sure that they hear what I have to say."
— Marty Jay Williams tells Victor Vance about his problems with the Cholos

Waking Up the Neighbors is a mission in Grand Theft Auto: Vice City Stories given to protagonist Victor Vance by Marty Jay Williams, leader of the Trailer Park Mafia, from his trailer in Little Havana, Vice City.

Victor visits Marty's trailer looking for some more work. Later that night, Marty informs Victor that the Cholos are moving in on his repo business. Marty tells Victor to blow up three Cholo delivery vans before they begin their rounds by using grenades. Victor destroys the first two with relative ease. However, the Cholos send two gun men in a Cholo Sabre after Victor. Despite this, Victor destroys the third delivery van.

The reward for completing the mission is $500 and the mission O, Brothel, Where Art Thou? is unlocked. 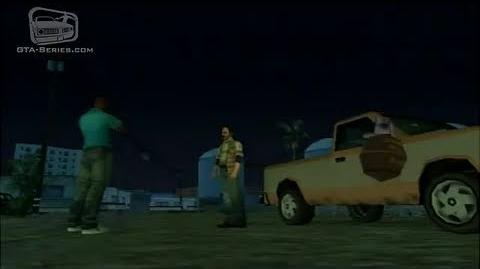