He is a friend of Trevor and Ron Jakowski, as well as the cousin of Floyd.

What is known of Wade is that he met Trevor in 2012, one year before the events of Grand Theft Auto V took place. While Wade was on his way to "the gathering" (a reference to The Gathering of the Juggalos) with Daisy Bell, Kush-Chronic and several others, they stopped at Sandy Shores to buy some drugs. This is where he met Trevor Philips, who continued to look after him once his friends had "abandoned him". Wade recalls it as "weird", as his friends drove to a quarry with Trevor, but were later nowhere to be found.

Wade is first seen alongside Ron Jakowski trying to calm down Johnny Klebitz after Trevor had sexual intercourse with Johnny's girlfriend Ashley Butler, which ended with Trevor killing Johnny and starting a war between him and The Lost MC; Wade joins Trevor in his attacks against the gang.

Wade is later asked by Trevor to search for Michael Townley, who Wade locates in Los Santos, after several failed attempts and threats from Trevor, under the name "Michael De Santa". They move into the apartment of Wade's cousin, Floyd, much to Floyd's dismay. Wade also assists Trevor in scouting a port for a heist.

After an incident in Floyd's apartment, which results in the deaths of both Floyd and his girlfriend, Debra, Trevor, in an attempt to stop Wade from discovering their deaths, claims that Floyd and Debra have "disappeared", just like Wade's old friends, before taking over the Vanilla Unicorn strip club and ordering two strippers to attend to Wade. Wade remains with them even after the main storyline, and even has dialogue with him claiming that each time that he tries to leave, the strippers give him another dance.

Wade appears to be a parody of the stereotypical Juggalo; a fan of the Insane Clown Posse, Tech N9ne and other artists that make music called "horrorcore" or "the wicked shit" originating from the Midwest. He is described by his artwork as an "intellectual", Wade is believed to be mentally challenged, based on his speech and dialogue. He is loyal to Trevor and will follow his every order, most likely out of fear, as Trevor often intimidates him. Part of this behavior comes from the fact that he has an inherently innocent, almost childlike mindset and considers Trevor to be a good person, believing everything he says, even when he is obviously lying.

However, despite his apparent innocent and childish behavior, he doesn't seem to have moral issues regarding killing someone (as he suggested to kill Ashley Butler right after Trevor killed Johnny Klebitz) even though he actually never killed anyone during the game. It could be possible that he ails from a stunted moral compass and simply does not have a good understanding of right and wrong. Also, as part of the contrast with his goofy appearance, Wade is a resourceful person in finding people, having been able to track down Michael De Santa by knowing only his past alias as Michael Townley and the family members.

Wade is a Caucasian male of average size. He has brown hair styled into dreadlocks, tied back, and several facial piercings. His usual outfit consists of a black and red Fatal Incursion jersey over a white t-shirt, and baggy JNCO-style blue jeans with brown sandals and white socks. He has a brown Harsh Souls bracer on his right wrist and a watch on his left. His alternative outfit is composed of a red bandanna wrapped around his head, a sleeveless black-and-red Fatal Incursion hoodie over a black T-shirt, baggy black Tripp-style shorts and black sneakers with red shoelaces.

Wade often paints his face white and black. He also wears eyelet earrings in his stretched ears, which seem to be around an inch and has several tattoos on his body, most notably on his hands.

Wade at the Vanilla Unicorn, after Floyd and Debra's deaths.

Wade's appearance is very likely based on Shaggy 2 Dope of the Insane Clown Posse. 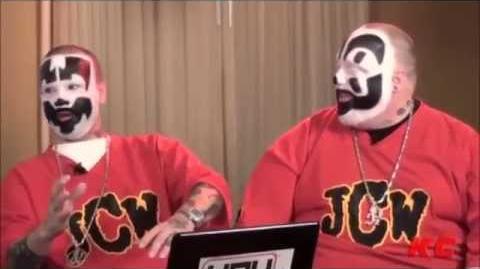