Standard White - 100%
“With this kind of acceleration and top speed, the Vortex lives up to its name. Are you ready for a highway facelift?”
— Career Builder description.
“The Vortex has its feet planted firmly in the café racer tradition, its head stuck firmly up the ass of contemporary streetfighter chic, and the less said about what it's doing with its hands the better. It's a synthesis that's going to change the world and your underwear forever.”
— Southern San Andreas Super Autos description.

The Pegassi Vortex is a streetfighter featured in Grand Theft Auto Online as part of the Bikers update, released on October 25th, 2016, during the Vortex and Sanctus Week event.

The Vortex is apparently influenced by the Ducati 1199 Panigale streetfighter, which is particularly evident in the front fender and forks.

The bike is depicted as streetfighter-style motorcycle with a distinctively aerodynamic design, featuring a front mudguard mounted on the forks that is similar in design to the one on the Hakuchou, while the upper area features a shield-shaped fairing with two small rectangular headlamps. Near the upper plate, there is a "Sports Bike" dial set with a digital display on the middle, similar to the Defiler.

The main body is mainly composed of a gray frame, side body panels and a lower fairing, as well as a medium-sized fuel tank with a silver cap on top. The engine bay features a radiator on the front, a clutch cover on the right and two short exhaust tubes on the rear, passing through the rearmost section of the lower fairing. Directly behind the rear portion of the main frame are two vertical tail lamps located within the frame and the corresponding foot pegs for the rider.

The rear section consist of a gray lightweight seat with dual tubular frames and a license plate below, while the rear wheel is connected by an unconventional L-shaped swingarm also finished in gray, with a single suspension spring and the corresponding chain drive and sprocket on the left.

The primary colour of the bike is applied on the main components and the details on the rear stock wheel, while the secondary colour is applied on the front forks, the rear frames and the foot pegs. The rims appear to be similar to the "Racer" rims available in Los Santos Customs, but they are wrapped with racing slicks in a similar manner to race vehicles like the RE-7B and ETR1, making it the only current motorcycle in the game to have this feature. These rims can also support a dedicated colour on the outer surrounding, which can be painted by selecting a custom rear wheel, applying a colour and change back to the stock wheel (as it won't reset to the default alloy colour). The rear wheel is also wider.

The Vortex is a fast bike that can compete with the Defiler and the Akuma, but gets beaten by the slightly higher end bikes of the game. It has decent acceleration and a high top speed. It cannot perform wheelies or stoppies due to its weight.

The vehicle is powered by a pushrod V-Twin engine, evidenced by the details found next to the cylinder blocks. The same is coupled to a 4-speed gearbox and emits a mid-revving sound with a loud engine note.

Installing any "Headlight" modification will increase its traction slightly, in the same way as a spoiler.

* Plates are unavailable if a custom "Seat" modification is installed. 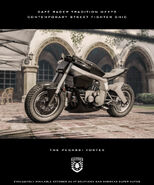 Promotional poster for the Vortex. 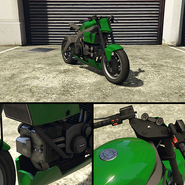 The Vortex on the Rockstar Games Social Club.

The Vortex on the updated Rockstar Games Social Club.

The Vortex in the cinematic preview on Rockstar Games Social Club. 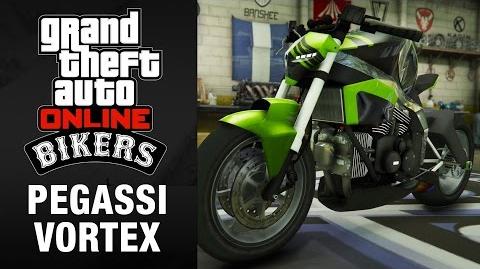