The Vortex is a hovercraft in Grand Theft Auto: San Andreas.

The Vortex is a single-seat hovercraft, distinguished by its unique large fan and an air cushion below its main hull. The vehicle uses a steering wheel that is connected to two rudders located on the back, giving the steering ability on it. The engine uses two exhaust pipes than seems to have no extra fixing point, therefore the player can see them wobbling while driving the vehicle.

Like some of the vehicles in the Grand Theft Auto series, the Vortex is probably an original concept from Rockstar Games. The Vortex may spawn with a two-tone paint scheme, with the secondary one as a wide stripe on the middle, as well as the large fan case and rudders.

Being an amphibious vehicle, is capable of moving both on land and water. The vehicle has extremely poor handling, and often slides off roads. Its' acceleration and top speed are mediocre, but workable. Due to being a hovercraft, it has no grip, and will eventually slide off an angled surface if allowed enough time at idle power. Using the handbrake allows the Vortex's rudder to deflect beyond normal limits, sacrificing speed for extremely powerful turn forces, which allows the vehicle to rapidly rotate. The vehicle's "brakes" (which can be assumed to be reverse thrust from the fan) are extremely weak, and at top speed, it is often more efficient to rotate the Vortex 180 degrees using the handbrake key, and begin accelerating forward. The Vortex appears to be powered by a twin-cylinder engine.

It has a top speed of 55 mph on level ground, which, unlike other vehicles, is not affected by ground type (asphalt, grass, railroad, etc.) due to the fact that it simply floats over the ground. It has a speed hardcap at 99 mph, which is extremely difficult to achieve, normally only achievable by dropping the vehicle from an extremely high height, or driving down an extremely long downhill grade created via modding.

The Vortex is also capable of gliding short distances if the player sends the vehicle flying off a high location, which behaves similarly to controlling an airborne car. With some effort, it is possible to 'fly' the Vortex from the summit of Mount Chiliad to Whetstone and beyond.

The Vortex's rear fan can be damaged by a ram to the rear end, which can potentially reduce the vehicle's overall performance greatly if the damage is great enough. The motor will also begin generating a trail of black smoke much thicker and more opaque than a normal car's engine smoke. 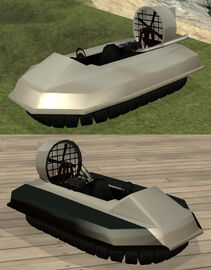 Like the Kart, the Vortex will only spawn in specific locations after the mission Cut Throat Business, appearing in the following locations: