“From the bestseller list of the 60s to the driveway of every self-respecting pimp and gangbanger of the 80s, the Voodoo is your best shot at purchasing the grit and authenticity that died out a decade before you were born. This one may look like it's been left under a bypass and used as a makeshift latrine by a family of hobos, but don't worry - with enough money you can change everything but the stink. This is where a classic starts. Eligible for customization at Benny's Original Motor Works.”
— Benny's Original Motor Works description.

The Voodoo is easily recognisable by the circular headlights within the grille, with a trim detail surrounding them and a small bumper below. On the sides, a detail can be seen on the rear fenders, along with circular rear-view mirrors. The cabin is relatively large and the windshield reaches the roof level. The rear of the car has an indented trunk and flat panels housing the circular tail lights on the edges. There is a bumper with a concave portion on the center.

In Grand Theft Auto: Vice City, the car is only available in red (with the exception of the unique black version seen in the mission Two Bit Hit), and has hydraulics instead of a horn. Because the Voodoo is classed as a gang car, it cannot be resprayed. However, in the beta version, a civilian version of the Voodoo appeared alongside a gang variant (known as the "Haitian Voodoo").

In Grand Theft Auto: San Andreas, it is seen in many different colours. The fuel cap is located behind the rear license plate, and the car will explode if the licence plate is shot. Hydraulics can be installed, or some may spawn with them installed.

In Grand Theft Auto: Vice City Stories, the Voodoo has a distinctive, high-performance engine and the hydraulics are replaced by a horn, and it is usually found in either a pink or grey colour.

In Grand Theft Auto IV, the Voodoo still assumes the design of the second generation Chevrolet Impala, but the rear fascia has the trademark six tail lights and the indented trunk with a chrome strip. The grille, roof, windows, and body style are similar to a 1964 Impala.

Design-wise, the Voodoo retains many of its visual cues and the two-door design from previous games, but the grille is narrower in comparison to the headlight sections, and the bumpers are larger and flatter, with bolt details on the upper side, vented sections, a front license plate and two rear square reverse lights. The windshield is at the same height as the other windows, the rearmost pillars are widers and the circular rear-view mirrors are mounted on the doors. It remains a lowrider, but it is classified as a muscle car in-game and, according to police radio chatter, bears the Declasse brand. It uses a unique interior with white leather and brown details.

The Voodoo is seen with both mono-tone and two-tone body colors, with the primary one on the hood, pillars, roof and trunk, and a secondary one on the lower portions of the vehicle. An additional tertiary color is applied on the details of the vehicle, being bumpers, grille, mirrors, handles, trims and wheel rims. All Voodoos feature "S.S." and "Limited Edition" badging, as well as a heart-shaped hood ornament. If the player looks carefully, they may notice a line through the center of the badge. This resembles a 'D', as in Declasse. Also, like many cars in the HD Universe, the Voodoo features a courtesy light which switches on when one of the doors is opened. It uses a set of wired wheels with knock-off hub caps.

The car appears to be used exclusively by local gangs (presumably the M.O.B., the North Holland Hustlers and the Jamaicans), appearing in territories under their control.

The Voodoo re-appears in Grand Theft Auto V and Grand Theft Auto Online, and is largely unchanged from Grand Theft Auto IV. However, it can only be found in a rusted condition, which cannot be rectified at mod shops or car washes, and it appears to have been debadged. Its interior is filthier in appearance, although its condition remains intact in contrast with some beaters.

Color distribution is the same as in GTA IV, but the tertiary color is absent, being replaced by a rusty chrome detail on the window trim, bumpers and details. The wheels retain the same wheel design, being a smaller derivative of the "Big Worm" lowrider rims at Los Santos Customs.

In Grand Theft Auto: Vice City, the Voodoo is moderately fast and agile, with smooth handling for a car of its size, and thanks to its low center of gravity, it will generally not flip unless the hydraulics are active. In Grand Theft Auto: Vice City Stories, however, the Voodoo's speed is slower and it struggles to climb steep inclines. After a collision, it may take a while until the Voodoo gets going again, and the wide turning radius can make it difficult to perform fast turns.

In Grand Theft Auto: Vice City Stories, The Voodoo's engine emits the same noise as the BF Injection. The engine appears to be turbocharged, though the performance appears to have been downgraded.

In Grand Theft Auto: San Andreas, however, the Voodoo is an excellent car to drive. Though it lacks in acceleration, it has noticeably good front traction, allowing it to turn responsively and tightly. Coupled with the ABS systems which it has equipped in GTA San Andreas (which is odd for a car of its age), it handles corners very well, being able to brake and turn simultaneously, unlike most cars which almost immediately lock their wheels upon braking. The Voodoo is the second fastest vintage car in terms of top speed in GTA San Andreas, with its top speed being on par with the Sultan.

In Grand Theft Auto IV, the Voodoo is powered by a medium displacement V8 in an FR layout combined to a 5-speed automatic transmission. Unlike its previous appearances, the car is very heavy, giving it a very low center of gravity, but at the cost of a lethargic acceleration speed. Its weight and bulk, however, make it very resilient to accident deformation. Engine build however is somewhat poor as the Voodoo will begin smoking after 3 to 4 head on collisions. Also the Voodoo cannot perform a burnout, as attempting a burnout will cause the vehicle to slowly roll forward. Top speed is low and suspension is rather low, being a poor choice for uneven terrains. The Voodoo shares the same engine sound as the Patriot.

The performance of the car in Grand Theft Auto V seems to have improved drastically over the Grand Theft Auto IV rendition, despite its rusty appearance, with good acceleration, top speed and cornering, and average brakes. The Voodoo is powered by the same medium displacement V8 in an FR layout, this time combined to a 4-speed gearbox.

Modification of the Voodoo in GTA San Andreas can only be performed at Loco Low Co. Like the Tahoma, the Voodoo's choices of customization is far more limited than most other lowriders. 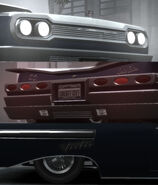 Closeups of the Voodoo in GTA IV, depicting its hood ornament, (1) Limited Edition and SS badging on the rear, (2) and the "Voodoo" badging on the sides. (3)

The Voodoo on the updated Rockstar Games Social Club.

The Voodoo in the cinematic preview on GTA V Rockstar Games Social Club.

The Voodoo in the cinematic preview on GTA Online Rockstar Games Social Club. 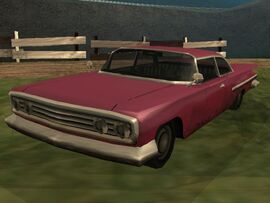 Standard Voodoos in GTA IV may also come with similar chrome parts as the Jamaican Voodoo. One Voodoo color scheme, a black and red combination, comes with gold chrome, while a dark candy red Voodoo (occasionally confused as being all-black) comes with duller bronze chrome parts. Although the former's overall coloration resembles the gang cars of the Spanish Lords, it is not affiliated with any gang.

In The Lost and Damned gang wars, the player can find Jamaican Voodoos identical to the GTA IV version, except by having both exhaust sets.

The "Jamaican" Voodoo driven by the Jamaican Posse in GTA IV.