GTA Wiki
Register
Don't have an account?
Sign In
Advertisement
in: Businesses, Weapons, Businesses in GTA V,
and 3 more
English

Vienna, Austria
“A weapons manufacturer headquartered in Vienna and famous for its pistols, Vom Feuer is an Austrian war icon the American people can get behind.”
— Description at Bawsaq.com

Not much is known about Vom Feuer, as they are only mentioned on the BAWSAQ website as one of the businesses with stocks available to buy. They are a firearms manufacturer headquartered in Vienna, Austria and famed for their pistols, as well as towable gun carriages and mounted weaponry. Vom Feuer also seems to manufacture or be affiliated with farming equipment in some way, as structures in Grapeseed have "Vom Feuer" emblazoned on them. The cocaine bricks players can see (and steal) during The Cayo Perico Heist also have the Vom Feuer logo on them.

Vom Feuer means "From the Fire" when translated from German.

Vom Feuer is likely based on a variety of European manufacturers, such as Steyr Mannlicher, Heckler & Koch and Glock, though many of their weapons are also based on American designs. 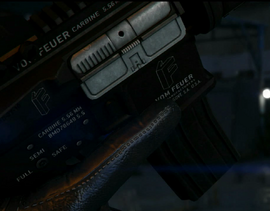 Close-up of the logo on the Carbine Rifle in the enhanced version of Grand Theft Auto V.