S_M_M_Gentransport (Pilot)
Not to be confused with the Volatol, a stealth bomber in Grand Theft Auto Online.
“The sleekest aerodynamics on the market, double swept blades, fantail rotor: when you're coming off a weekend's team-building ketamine workshop there's no more costly way to move at immense speeds in perfect comfort and near-total silence. This is the real business class.”
— Elitás Travel description.

The Buckingham Volatus is a luxury helicopter featured in Grand Theft Auto Online as part of the Further Adventures in Finance and Felony update.

The helicopter appears to take influence primarily from the Airbus Helicopters H160 and the Eurocopter EC155. The H160's influence can be seen heavily in the rotor assembly and blades, Fenestron tail, side profiling and windscreen.

The Volatus takes a similar shape and layout to the Swift, sporting a triangular nose and a relatively tall cockpit with the corresponding doors, side steps and the nose landing undercarriage. The main section is large and features sliding doors with access steps and the main landing undercarriage, along with a tall engine compartment with black slatted intakes, rear exhausts, a large rotor hub and five long blades with angled tips. The tail assembly/empennage features a Fenestron tail similar to the Valkyrie, with dual fins on either side of the tail, a small lower vertical stabilizer and a tall upper vertical stabilizer. Various markings can be seen around the fuselage, displaying the manufacturer name.

The cockpit of the aircraft features a small instrument panel with the same "Flyer" dials from many basic aircraft, such as the Maverick and the Police Maverick. Its layout is also identical to that of the Maverick and the SuperVolito, but adds the green "Gear Up/Down" displays on the lower right corner of the panel. Similar to the Swift Deluxe, the interior is fitted with luxury equipment, such as a TV screen, surround sound, leather seating and a coffee machine. Passengers can drink champagne and browse the internet within the helicopter, instead of using the Mobile Phone. Similar to the Deluxe vehicles, the player can also hold down "Enter Vehicle" button to enter the rear compartment.

The aircraft features a variety of colour combinations, where the primary one is applied on the nose, part of the sides, engine compartment, outline of the tail boom, the upper portions of the vertical fins and the stitches of the seats, while the secondary one is applied on the portions around the windows, rotor hub and sections of the underside. The portions on the underside, the lower sides of the fuselage and most of the tail boom, stabilizers and fins are determined by the "pearlescent" colour, which can be painted through the corresponding option from the primary colour (only if the player chooses a metallic/crew colour). It uses a set of wheels derived from industrial trucks like the Mule, the Benson and the Phantom, also used on many aircraft.

The Volatus has decent performance for a helicopter. Statistically, it has the same top speed as the Swift and a slightly better maneuverability, but its rather large size makes it not suitable for landing in tight spaces. The helicopter’s narrow landing undercarriage makes it prone to lean on the ground, especially in steep inclines. This also causes an erratic behaviour when flipped to a side, often unable to recover and resulting in it being severely damaged or destroyed in the process.

Since it is designed for luxurious, speedy traveling like the Swift, it is not very durable: ten seconds of continuous Minigun fire will cause the engine to stall, destroying the vehicle. Therefore, one should consider only using it to travel from place to place in quick succession in non-combat situations. The rather large windows also expose the occupants to gunfire, which is a risk for the pilot.

The helicopter is powered by twin turboshaft engines, evidenced by the dual intakes and exhausts on the upper compartment. It uses the same traditional sound from most basic helicopters, albeit with a slightly faster pace due to the 5-bladed rotor.

Upon being converted into a personal aircraft, the Volatus can be repainted with a primary and a secondary colour. It is possible to change the tertiary colour via the pearlescent color given with the primary "metallic" colour. The markings cannot be removed, however.

The Volatus as seen in the GTA Online: Further Adventures in Finance and Felony update trailer.

Top view of the Volatus in the update trailer.

Front view of the Volatus in the update trailer.

The Volatus as seen in the official The Diamond Casino & Resort website. 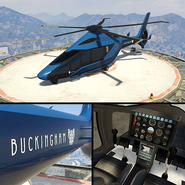 The Volatus on Elitás Travel.

The Volatus on the updated Rockstar Games Social Club.

The Volatus in the cinematic preview on GTA Online Rockstar Games Social Club. 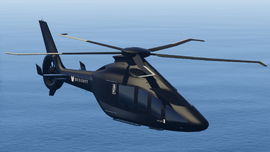