View source
watch 02:56
Raise a Floppa - The Loop
Do you like this video?
Play Sound
Not to be confused with the Volatus, a luxury helicopter in Grand Theft Auto Online.

No
“A lot of things become clear while you're in the cockpit of a Volatol. As you glide along in the blissful quiet of high-altitude flight, you find yourself at peace, reflective, content. And thousands of feet below, the shadow of your colossal delta wing ripples silently across towns, cities and states, followed by the atomizing roar of heavy ordnance. This is how it was meant to be.
Please note: This aircraft is excluded from Pegasus Lifestyle Management and must be stored in a personal hangar.
”
— Warstock Cache & Carry description.

The Volatol is a delta-wing strategic bomber featured in Grand Theft Auto Online as part of the Doomsday Heist update.

The Volatol is a V-Bomber primarily based on the Avro Vulcan for the main shape and purpose, with the flight deck of a Myasishchev M-4 and engines/intakes similar to the de Haviland Comet.

The Volatol features a large fuselage with a sharp nose, a large cockpit and an access ladder door on the left similar to the RM-10 Bombushka and the Titan, along with the corresponding hatches for the nose undercarriage. The main section consistS of the large Delta wings that house most of the aircraft's vital components, being the main engines with their corresponding intakes and exhausts, the inner elevators, the outer ailerons, the airbrakes located ahead of the ailerons, and the underside hatches for the main undercarriage, along with large hatches for the bomb bay. The tail boom is short in comparison with the rest of the aircraft and mounts a vertical stabilizer with a large rudder.

The interior of the aircraft is largely identical to the RM-10 Bombushka, having a green cabin with a large flight deck that uses the same dial set, and a control room with two computer stations for the front and top turret gunners. However, a metal sheet is placed over the centre of the cabin (where a walkway to the nose section existed on the Bombushka), and the control room lacks the posters and the star emblems on the computer stations.

The primary colour of the vehicle is applied to the fuselage, wings and turrets, while the secondary one is applied to the door latch, wing tips and inner portions of the intakes and the exhausts. It uses a set of plain industrial wheels also used on the Titan and the Bombushka, with the same layout as the aforementioned vehicles (a single nose gear wheel and twin main gear wheels per side).

The Volatol performs similar, if not identical, to the RM-10 Bombushka, as well as other larger jet-powered planes. Although it has a high top speed, it is still one of the slowest aircraft in the game, with sluggish handling and low acceleration.

The aircraft is powered by four turbojet engines, which are located on the wings and produce the same sound from aircraft such as the Shamal and the Luxor.

The Volatol is a highly vulnerable vehicle, as the large profile, low maneuverability and lack of armor gives little to no protection against other weaponized aircraft, as well as any weaponized ground vehicle. Explosive rounds are also major threats to the aircraft, as the plane would not have enough speed and maneuverability to counter-attack. The Volatol has no missile proximity or lock on alarm, which makes evading and using counter measures difficult. It is unknown if this is intentional or not. Given its size, this makes the Volatol very vulnerable to all forms of missile attacks.

Unlike most aircraft, which have a capacity of 50 bombs, the Volatol carries 100 bombs, twice the amount of most bomber aircraft.

When purchased, the Volatol comes painted in the following colors by default:

The Volatol bombing a SAM turret in the update trailer.

Pre-release screenshot of the Volatol. 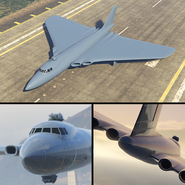 The Volatol on Warstock Cache & Carry.

The Volatol on the updated Rockstar Games Social Club.

The Volatol in the cinematic preview on GTA Online Rockstar Games Social Club. 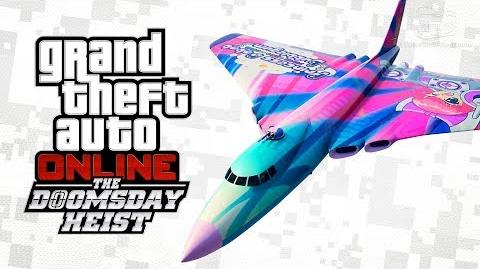