The Vivisection game board logo was also available on a T-Shirt in Grand Theft Auto Online in a special crate drop during The Festive Special update in Christmas of 2014.

Male announcer: It's the board game that's sweeping the country!

Male announcer: Science is finally fun, with Vivisection! Get your lab coats, kids, because you get to run real experiments on real, live rats, while playing a fun game for the whole family! Run your rat through Vermin's Vortex Maze. It's the game that's just like life. Just when you think you've won, someone blinds you with industrial solvent! Conduct all kinds of fun experiments, including cosmetic allergy tests and chemical warfare preperation!

Male announcer: Because real science is real fun. Conduct experiments on friends, too!

Male announcer: Who says scientists are boring dorks who never have any fun? Disembowel animals time after time for money, kicks, and scientific presige with Vivisection!

Male announcer: The #1 board game is now a fully licensed video game: Vivisection's Lab Rat Kart Racing! It's better than all those other licensed kart racing games, because, this time, you don't die of boredom, you die of anthrax! Video games and education meet in this incredible package, as you race, chase and scream your way through a twisty course that bears a marked similarity to all the other kart racing games we made!

Game: You won! Cool, you advanced to the next level, where you race on the same track again!

An ad for the kart racing game.

An ad for the game board. 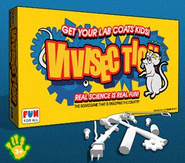 The ViviSection game board.

The T-shirt in GTA Online.

Retrieved from "https://gta.fandom.com/wiki/Vivisection?oldid=1258698"
Community content is available under CC-BY-SA unless otherwise noted.