Standard White - 100%
“Try to relax. There's a first time for everyone. You take another furtive glance at those ravishing curves, and feel faint with desire. Suddenly it doesn't matter how rich you are: this time, you're out of your league. Your mouth is dry. Your pants, sodden. And then it happens: the doors glide open, you take your seat, and nothing is ever the same again. There's no going back. Welcome to Visione.”
— Legendary Motorsport description.

The Grotti Visione is a hypercar featured in Grand Theft Auto Online as part of the Smuggler's Run update.

The Visione's body appears to be based on the Ferrari Xezri Competizione Edition, seen in the overall profile and front fascia, with elements of the McLaren P1 for the headlamps, front bumper and rear fascia (especially the P1 GTR, shown by the visible belts and fans through the rear fascia). The sides of the car seem to be based on the Ferrari LaFerrari, sporting similar side vents and side mirror design, as well as a bottom brake light on the rear end.

The Visione is clearly distinguished by its aerodynamic design and sporty features around it, where the front of the car is mostly predominated by the carbon-fibre splitter at the bottom and a curved plastic separation/front spoiler around the middle section of the front intake, which extends past the car's bodywork and descending towards the splitter, creating two vertical side intakes. The area above the plastic separation features two additional separations surrounding a smaller portion of the front intake on the centre, while the upper edges of the curved surrounding are occupied by a set of two modern strips on the borders of each housing and dual circular high-beam units. The bonnet area features two ducts with a central separation and the corresponding Grotti emblem on the front.

The sides of the car clearly features bulky fender arches above the wheels and carbon-fibre side skirts at the bottom, while upswept concave sections can be seen running through the doors, intended for the air to flow from the front exit vents to the rear engine bay/rear brake intakes. The greenhouse area makes use of rectangular mirror wings over the doors, a roof scoop with an aerial/antenna over it and curved body lines continuing from the door areas, with a permanent black section around the windows, on the pillars and the front half of the roof. The area behind the cabin mostly consist of a carbon-fibre strip on the centre with a rear window, which is curved on the rearmost side and exposes the engine compartment, while the rest of it consist of bulky fender arches and black strips with slanted borders next to the central strip, along with a curvature on the upper rear area of the roof. A Grotti emblem can be seen on the rearmost section of the carbon-fibre strip.

The rear end of the car denote a more aerodynamic profile similar to the front, using mesh gratings on the sides and two circular exhaust tubes on the centre. A set of red light strips can be seen running from the upper arches of the rear end and reaching down to the bottom, while smaller amber/white light strips can be seen on the lower separation. The centre of the rear end features a license plate mounted over the lower separation and an F1-style brake light just below it, while the passenger side features an orange tow hook. The entire underside of the vehicle is carbon plated, with long fins on the rear area acting as the rear diffuser.

The interior appears to use the same dials and features from the X80 Proto, but the steering wheel reuses elements from race-type vehicles such as the Tyrus, using paddle shifters and switches on it. This steering wheel appears to be a variation of the "Rally Clubman" steering wheel available in Benny's Original Motor Works for selected sports cars, albeit with a carbon-fibre section on the centre and bearing the Grotti emblem on it.

The vehicle is painted with a primary colour on the overall bodywork, as well as a secondary colour on the mirror wings and the interior stitching. A trim colour is also available for the dashboard and part of the doors. Similar to vehicles like the ETR1 and RE-7B, the Visione features Atomic racing slicks for the stock wheels, with the rims having seven split spokes and a protruding centre with the corresponding Grotti emblem on it. The rims also support a dedicated wheel colour, although only examples generated in the Content Creator may have one.

The Visione is a very competitive hypercar, with a top speed similar to that of the Nero and its GT orientation, the Nero Custom. The Visione's powerful engine provides ample power to accelerate the car from 0 to 60 in an instant, and once going, the vehicle has a large amount of downforce due to the stylish yet sleek, low-profile aerodynamics. Handling is again acceptable, and steering radius is more than enough to execute bends, although the player may find themselves slowing down often too much to execute some of the more difficult bends, and due to the rear wheel drive layout, the vehicle is prone to losing some traction. Overall, however, the configuration of the engine above the rear-drive axle means stability is not a hindrance, although weight distribution is relatively poor because of this.

The car is powered by what appears to be a V12 engine coupled to a 6-speed transmission and powering the rear wheels. The sound of gear shifts indicates paddle-shift operation, giving the car a unique transmission sound. One of the vehicle's unique features includes functioning fans which appear behind either side of the rear vents, as well as a cloned functional cam-belt reused from hood-less vehicles such as the Tornado Rat Rod, Fränken Stange and Phantom Wedge. The engine sound appears to be a higher-pitched variation of the one used in the Vagner. 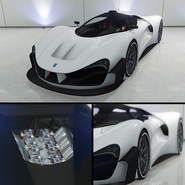 The Visione on Legendary Motorsport.

The Visione on the updated Rockstar Games Social Club.

The Visione in a Cinematic preview on Rockstar Games Social Club. 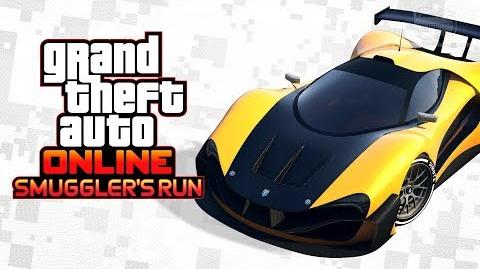