"After hours of crate digging, you know when they've found the perfect sample to butcher on your latest EDM track. This is that record. Remix culture meets auto culture with the Virgo, a car that's already lower and slower than any road-certified vehicle can afford to be - and trust us, you ain't seen nothing yet. Your old man thought this was stately and composed back when he was curb crawling his way through the 70s, so jack up, jerk it off, and show him how the young folks get down."
―Benny's Original Motor Works description.

The Dundreary Virgo Classic (formerly named "Virgo") is a two-door car featured in the HD Universe.

The rear is also quite similar to the Remington from Grand Theft Auto: San Andreas. Also, it is one of the vehicles to have red rear indicators, along with the Vapid Taxi, Police Cruiser, NOOSE Cruiser and Voodoo.

While the original Virgo is absent from the singleplayer, it was added to Grand Theft Auto Online as part of the Lowriders: Custom Classics Update for the Xbox One, PlayStation 4 and PC, dubbed as the 'Virgo Classic'. It mostly remains unchanged from its GTA IV rendition, featuring only slight cosmetic differences like a silver bottom skirt and a different tail lights design.

The stock version does not contain any sort of body upgrades in Los Santos Customs, however, there are a wide variety of modification options available at Benny's Original Motor Works if the player decides to upgrade it into a lowrider.

Powering the rear wheels of the Virgo is what is modeled as a single camshaft V8, coupled with a 5-speed gearbox. The engine feels rather restricted in terms of power, resulting in rather torpid acceleration mid-range. This shortage of brute force does not seem to have limited the top speed to such a degree. One thing this car can do exceptionally well is corner. Despite being a large, ungainly classic American car, when pushed to the limit it is perfectly capable of attacking corners vigorously with just the mere suggestion of oversteer, being an ideal weapon of choice in classic car races. It also glides around bends with such docility when driving in a relaxed fashion, though even at low speeds body roll can be pronounced. Old drums behind the wheels make for rather poor braking.

The Virgo Classic's performance had shown improvements from its GTA IV counterpart, being able to take corners easily and when it starts to lose traction, it can be corrected. Overall top speed and acceleration is fair, though its heavy body can easily withstand head-on collisions against traffic several times. 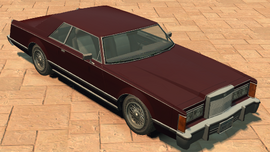 The Virgo Classic on the Rockstar Games Social Club.

Retrieved from "https://gta.fandom.com/wiki/Virgo_Classic?oldid=1141226"
Community content is available under CC-BY-SA unless otherwise noted.