The Virgo was added to Grand Theft Auto V as part of the Ill-Gotten Gains Part 1 update, and takes a different approach to the 3D Universe model. Manufactured by Albany, the vehicle's general body style is inspired by the eight generation Cadillac Eldorado, with the front grille and headlights resembling a 1967 Chrysler Newport and the rear resembling a 1968 Newport, with available modifications adding a very pronounced rear mounted spare tire and rear wheel arch covers and some design cues from early 1970s Cadillac Eldorado models. The Virgo happens to resemble the Esperanto from the 3D Universe GTA games.

The Virgo has improved speed and handling compared to its Classic counterpart, although its performance is rather lacking in its class. The engine feels large and powerful, but is held back by the very heavy body. While a fair bit slower than other muscle cars, the Virgo does not produce understeer when tackling sharp corners and can be easily recovered when it begins to drift. The same heavy steel construction that slows it down gives it excellent durability, however. Braking power is very good for an old, heavy muscle car. Despite the website description saying it has the handling of "a shipping container on shopping car wheels", the Virgo has very good, if not one of the best, handling profiles for the "muscle" class.

The Virgo is stated to be powered by a 327cui (5.3 liter) V8 capable of pushing 360HP. The engine sticks true to its stated configuration, sporting a V8 engine coupled to a 5-speed gearbox in a front engine, rear wheel drive configuration. Said website also claims it has rather low acceleration - 0-60 seconds in 9.9 seconds, and a top speed of 125 mph. The first person speedometers seem so to surpass these statements, with a faster acceleration rate of 6.5 seconds and a top speed of around 95 mph. If the turbo upgrade is installed on the Virgo, it will feature a unique turbocharger sound. 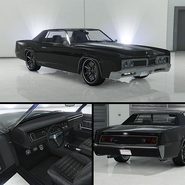 Retrieved from "https://gta.fandom.com/wiki/Virgo?oldid=1187312"
Community content is available under CC-BY-SA unless otherwise noted.