In-game time
“Eh fool, I got a stick up for you if you interested. The Lost selling yayo down at Mission Row by the Unicorn, and we are talking weight. I can move this stuff if you can get the right discount, you know what I mean. Bring the package round to my spot, I'll hook you up, if you caught and they sweat you, you don't know me.”

Violent Duct is a mission in Grand Theft Auto Online given to the player by Gerald. It is available for up to 4 players.

The Lost MC are selling cocaine under a viaduct near the Vanilla Unicorn near Strawberry. Gerald is interested on the stuff and orders the team to go there and collect it. Once the team arrives there, they will need to eliminate the Lost MC members to get to the coke. Once one of the players picked it up, the team will need to get the cocaine to Gerald's apartment. 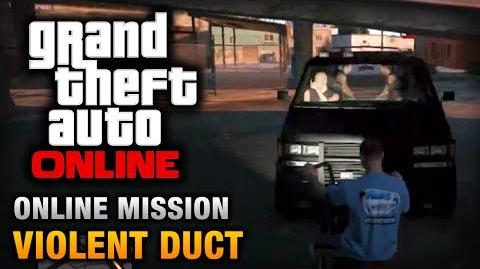