Yes
The Violator is a boat that appears in Grand Theft Auto: Vice City Stories.

The Violator does not seem to be based on any particular model, but appears to be loosely based on a Donzi 38 ZRC, with several modifications.

The Violator is designed as a speedboat with an overall design seemingly a mixture of the Speeder and the Squalo, having a bulky hull with black trim on the edges and dual vents in the center, while the cabin quarters feature a rounded windshield, two regular seat on the front and an unusable bench seat on the rear. On the stern/rear area, there is an exposed engine in the center and dual spoilers/air vents beside it, along with the propulsion jets on the rear end.

The boat can be seen in a variety of two-tone colors, where the primary one is applied to most of the body, and the secondary one in the form of side stripes on the hull, various stripes in the center and the sections between the vents and the windshield, the section between the cabin quarters and the engine, the tips of the dual spoilers/air vents, and the details above the propulsion systems.

The Violator has good handling and better durability than the Speeder, but is slower.

Similar to the Jetmax, the boat uses a big-block V8 engine mounted on the rear, as well as dual pump-jets. It shares the engine sound with all other boats. 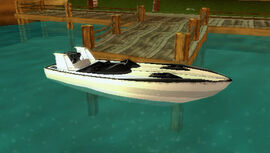 Side view of a docked Violator.