"What you really need is a more recognizable gun. Stand out from the crowd at an armed robbery with this engraved pistol."
―Grand Theft Auto V description on Ammu-Nation and Social Club.

The Vintage Pistol is mostly based on the FN Model 1922. It is a semi-automatic custom made engraved pistol with a grey/silver color. It appears to be one of the oldest handguns, as it lacks any Picatinny rail for attachments.

The Vintage Pistol has mediocre accuracy and has one of the smallest magazine capacities in the game. It has slightly better damage than the pistol, however due to its low ammo capacity, it is not the greatest weapon to use in combat and is mostly a unique novelty weapon. 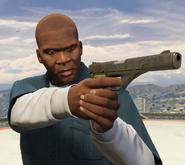 Artwork.
Add a photo to this gallery

Reloading.
Add a photo to this gallery

Retrieved from "https://gta.fandom.com/wiki/Vintage_Pistol?oldid=1269989"
Community content is available under CC-BY-SA unless otherwise noted.