It is located in Vinewood on Vinewood Boulevard in Los Santos, starting at the corner of Market Boulevard in the east and extending 3 city blocks to the Vinewood Cemetery. 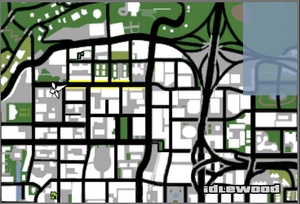 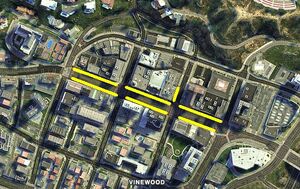 There are 51 stars in the pavement along the north side of the boulevard and 72 along the south side. There are no stars on the eastern end of the north side from the last intersection before Market Boulevard. The stars are low resolution and do not have any legible details on them. 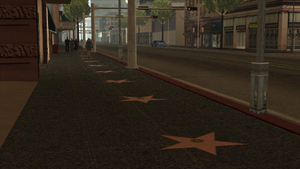 The Walk of Fame looking east.

An obvious copy of the Hollywood Walk of Fame along Hollywood and Vine, it features 326 stars on the pavement tiles with the names of various radio personalities, cartoon characters, actors, filmmakers, musicians and other celebrities from different Grand Theft Auto games from both the HD universe and 3D Universe. There are 131 blank stars with no names yet allocated and 195 named stars.

Each marked star features an icon indicating the artistic field of the recipient.

This a list of names as they appear on the walk from east to west in the HD rendition.

Retrieved from "https://gta.fandom.com/wiki/Vinewood_Walk_of_Fame?oldid=1139306"
Community content is available under CC-BY-SA unless otherwise noted.