The mission begins when Trevor approaches the home of Tyler Dixon. The home is surrounded by a wall which can be easily climbed. Inside the estate, there is a gardener working at a van who can be knocked out. The target is Dixon's swim trunks, which are located on a chair next to the pool at the back of the house. Dixon and a female companion are swimming in the pool and will complain and eventually call the police if Trevor is spotted. The mission ends once Trevor has obtained the swim trunks and evaded any resulting wanted level.

(Only if Tyler its not killed)

"A vagrant broke into Tyler Dixon's Rockford Hills home and stole some of his clothes while the reality TV star was relaxing by his swimming pool. Ty-Di, the ex backing dancer who became famous for marrying Cloe Parker, divorcing her on TV, getting clean on a celebrity rehab show, losing weight on a celebrity dieting show, reorganizing his closet on a celebrity hoarding show, and solving a string of other personal problems for money on television, had a predictably moronic and arrogant response to the incident, "Can you imagine being so famous that people wanna steal your underwear? It's no big deal. I only wear clothes once anyway. It's just really humbling, dude." We'll stay on this story in case something interesting happens, which we doubt." 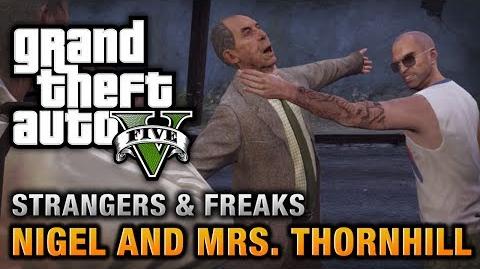