Location on the map (in-game GPS). Richman Glen is part of Vinewood Hills.

“Vinewood Hills has the highest concentration of celebrities in Los Santos, where they pay $1000 a square foot for space, privacy, views, and the peace of mind that their neighbors are just as self-obsessed and annoying as they are.”

It is bordered by Vinewood and Rockford Hills to the south, Great Chaparral to the north, the Tataviam Mountains to the east, and Pacific Bluffs to the west. Vinewood Hills is a large neighbourhood, taking up much of Los Santos' northern area.

Vinewood Hills makes up Los Santos' largest and northernmost neighbourhood, spanning a considerable distance from Richman Glen in the west to the Tataviam Mountains in the east, Vinewood and Rockford Hills to the south and the Great Chaparral and the Tongva Hills to the north. The hills are characterised by steep, peaceful lanes which are rural in nature in the north and increasingly urbanised towards the south. Development in the neighbourhood is almost entirely composed of sparsely arranged, large, modern houses that are home to San Andreas' rich elite and celebrity populations.

The Vinewood Sign and the famous entertainment venue Vinewood Bowl in the east and the Galileo Observatory towards the centre of the district are the most notable points of interest in the hills, commanding impressive views over the city.

The highest point in Vinewood Hills is located just to the north of the Galileo Observatory. It is one of the only points in the state that provides good views across both Los Santos and Blaine County.

Vinewood Hills are one of two hill ranges (along with Pacific Bluffs) that are within Los Santos city limits.

Lake Vinewood is located adjacent to the Galileo Observatory. The Lake Vinewood Estates in the area appear to be home to the wealthiest residents of Vinewood Hills.

The neighbourhood is based on and named after Hollywood Hills. 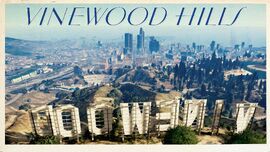