Planet Hollywood
“Founded by some of the biggest actors in Vinewood, this chain restaurant has fallen on hard times in some cities, but not in Liberty City, Jakarta and Las Venturas. Tourists still storm the doors looking for a Vinewood Café t-shirt. Wander the walls of memorabilia - including the survival knife from Exploder, props from Just the Five of Us, and the alien mask from Yuppie and the Alien. The deep fried hamburger double dipped in ranch dressing is to die for - and the 2 foot long margarita glasses are filled with enough low grade tequila to blind an elephant. It's little wonder that so many overweight Midwestern housewives let it all hang out. Just like they do in Vinewood.”
— LibertyCityNightlife.com

Vinewood Bar & Grill is a Vinewood-themed restaurant featured in the HD Universe of the Grand Theft Auto series.

In Grand Theft Auto IV, there is an establishment on Columbus Avenue in The Triangle district of Algonquin, Liberty City. Judging by its Googie-styled and space-like logo and mascot of the restaurant, its interior decoration may be entirely based on 1950s/60s-styled furniture. Given the subject matter of its theme, the restaurant is presumably a parody of Planet Hollywood.

In The Lost and Damned, Johnny Klebitz can bring friends here, though they will usually complain. In The Ballad of Gay Tony, Luis Lopez is able to take Armando Torres and Henrique Bardas to the restaurant as a friend activity.

In Grand Theft Auto V and Grand Theft Auto Online, a branch of this restaurant can be found in the Rockford Plaza at the intersection of Hawick Avenue and San Vitus Boulevard in Burton, Los Santos. It cannot be entered and plays no role in the story. However, when switching to Michael, he can be found on his Tailgater dropping Tracey or Jimmy outside the restaurant. 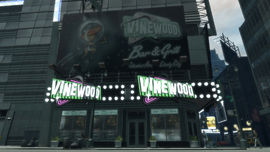 Columbus Avenue, between Iron and Hematite streets, The Triangle, Algonquin. 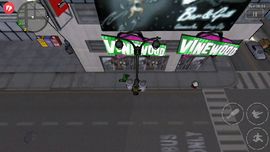 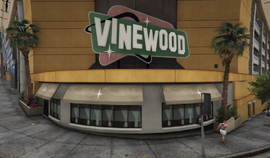