“Your trip to Los Santos would not be complete without a visit to the motion picture capital of the world: Vinewood. We recommend a walk on Vinewood Blvd, where the only stars you'll see are the ones encased in concrete, on the Walk of Fame.”
— GTA San Andreas City Guides manual

Vinewood is an affluent district in Los Santos, San Andreas featured in Grand Theft Auto: San Andreas. It is bordered by Mulholland to the north, Richman to the northwest, Market to the south and east, Temple to the east and Rodeo to the west.

Vinewood is located in the north-central region of the city. The district is based on Hollywood and West Hollywood, Los Angeles, although some of the counterparts of iconic Hollywood landmarks, such as Blastin' Fools Records (Capitol Records Building) or the Cathay Theater (TCL Chinese Theatre), are actually located in the nearby districts Market and Temple.

Vinewood is one of the least populated areas in the urban areas of Los Santos, but also one of the most affluent, along with Mulholland, Richman and Rodeo. The district is home to the movie and television studios of the city. Typically, the player can find more high-class vehicles and sports cars being driven around in this area.

The cemetery in Vinewood is featured a few times throughout the game. It first appears in the mission Sweet & Kendl, when Sweet, Kendl and Carl Johnson are all mourning the death of their mother Beverly with family friends Big Smoke and Ryder. After Kendl leaves, the rest of the group are attacked by Ballas as they are about to leave. Big Smoke's Perennial is destroyed, prompting the gang to flee with BMX's and to head back to Grove Street. When Ballas attend the funeral of Little Weasel, Sweet devises a plan to sneak over the wall located at the back of the cemetery and kill Kane, another high ranking Balla, and his backup.

The country club, located to the west of the district, makes a minor appearance during the mission Cut Throat Business; it appears as one of the shortcuts OG Loc uses to flee CJ and Madd Dogg. The final stage of the land race Freeway takes place in Vinewood as well. 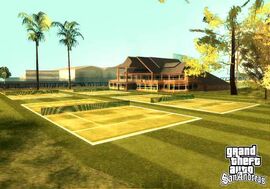