Standard White - 100%
“Today's society is broken. We all know who's behind it, but we're afraid to speak out. Hard-working cops, human rights lawyers, investigative journalists, social media managers - a cartel of vested interests who would think nothing of trampling the freedoms of a semi-legitimate businessperson such as yourself. It's time someone took the law into their own hands, and if you're in the market for some fully weaponized, rocket-propelled civic order, the Vigilante is the only game in town.”
— Warstock Cache & Carry description.

The Grotti Vigilante is a custom weaponized vehicle featured in Grand Theft Auto Online as part of the GTA Online: Smuggler's Run update, released on October 31st, 2017, during the Anniversary Specials 2017 and Halloween Specials events.

“Introducing the Vigilante, the ultimate instrument of vengeance. Equipped with rocket propulsion technology and front-mounted machine guns (with room for a missile upgrade), the Vigilante will strike fear and provide swift justice to those who come for your throne. Impose order on the streets of Los Santos with the Vigilante, available exclusively from Warstock Cache & Carry.”
— Rockstar Newswire description.

The Vigilante appears as a 2-door custom car primarily based on the Batmobile created for the 1989 movie Batman (which was itself built on a stretched Chevrolet Impala chassis). However, the rear of the vehicle is based on another iteration of the Batmobile — specifically the "Tumbler" created for the 2005 film Batman Begins.

The Vigilante is distinguished by its long bodywork and a very aerodynamic design, where the front end has a narrow profile and features two pronged fins with sharp bottom edges, as well as a circular opening in the centre with what looks like helical groovings. A set of pop-up headlights with numerous LED strips are also present, which are integrated into the front fins. Interestingly, when retracted, the borders between the headlight casing and the bodywork itself cannot be seen, seemingly morphing into the bodywork. The bonnet/front area features a slightly downward shape in the middle and a protruding section, which spans the width of the frontal opening and leads towards the windscreen area.

The sides are characterised by the concave profile around the front and the dual lower intakes, as well as large rear fenders that start from beside the cabin area and elevate up above the rear wheels. The cabin area features a split windscreen and gull-wing doors, along with a sloped roof. There is also an extra formation starting from the front windscreen separation and leading towards the rear, as well as an additional formation surrounding the back of the cabin.

The rear of the car features an integrated spoiler and tail lights in the same pattern as the headlights, with the upper ones working as the main lights and the lower ones as brake lights. A sharp edge can be seen in the centre of the upper section, while the lower area is mostly dominated by the rear wheels, the rear axle, the suspension shocks/springs, and the rocket booster.

The interior is very unique, sporting dial sets and multiple switches derived from motorsport vehicles such as the RE-7B, the ETR1 and the Drift Tampa, as well as various digital screens derived from fighter jets such as the P-996 LAZER, the Hydra and the Besra (albeit with a red colour and no animation due to the lack of Lazer-type dials within the Race dial set). A set of racing seats can be seen as well.

The Vigilante can only be painted with a single colour for the body. Although not accessible, a trim colour is available for the seats, which seems to be darker than most cars with paintable seats (always set to black). It uses a set of plain rims with open ridges supporting a dedicated colour (again set to black in purchased examples), fitted with racing slicks in a similar manner to cars such as the RE-7B and ETR1. The rear wheels are evidently larger and wider, with a dual-wheel configuration similar to various trucks.

The vehicle is armed with a set of machine guns located on the end of the pronged fins. It can also be modified with missile launchers.

The Vigilante is a well performing sports car that also combines offensive capabilities from armed and heavy vehicles. It has good acceleration, good traction and decent handling, and its mass, being similar to that of the Insurgent, allows it to plow through traffic with ease, especially due to its front end. Due to the length, however, the player may experience understeer, and the width of the rear makes it susceptible to colliding with other obstacles, losing control as the vehicle spins.

Contrary to what the design suggests and opposed to its real-life iteration, the Vigilante has the general profile of a rear-engined vehicle rather than a mid-engined vehicle, as small intakes can be seen behind the cabin and the rocket booster appears to be directly hooked up to the vehicle's transmission and engine. In addition, exhaust gases appear to come out of the rocket booster, as well as flames when the vehicle is revved, contradicting the purpose of the rocket. Engine smoke when damaged reveals that the engine itself is indeed located behind the cockpit. This means the practicality of the vehicle's turbine intake is obsolete, as the intake lacks a turbine prop altogether, and the turbine chamber fails to run the length of the car, as the cockpit completely blocks the airflow's path. By painting the car with a brighter colour, it shows that the intake leads to nothing. The engine sound is shared with the Trophy Truck, including a louder version of the ignition when the engine starts.

The Vigilante features a rocket booster similar to that of the Rocket Voltic, allowing for a quick acceleration. It appears to perform better than most boosters, as its recharge time is much faster, taking only 2.5 seconds. In addition, its effect on NPCs, players and vehicles is much stronger, capable of pushing them away at a greater distance.

The Vigilante's armor is generally resistant at crashes and also features bullet-resistant windows, which serves as the sole defence against standard bullets. However, it does not have any sort of armor against explosives; one direct hit by a Homing Missile is able to take it out.

When aboard, the driver or the passenger is unable to switch to their drive-by weapons, leaving them with only the vehicle's exterior weaponry.

The Vigilante can only be modified at a vehicle workshop, which is located either inside an upgraded Mobile Operations Center, in an upgraded Avenger, or at the Arena Workshop (if the player has purchased the Weapons Expert mechanic). 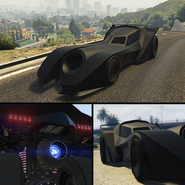 The Vigilante on Warstock Cache & Carry.

The Vigilante with its rocket boost activated.

The Vigilante on the updated Rockstar Games Social Club.

The Vigilante in a Cinematic preview on Rockstar Games Social Club. 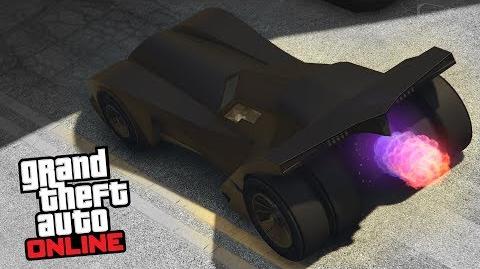