vigero2
Not to be confused with the Virgo.
“You'll want to start smoking when you buy this car. It's almost required. You've stepped into a new phase in your life. You're not afraid to face danger. It's the 1970s all over again, and that cheerleader is drunk in your front seat.”

The Vigero essentially resembles a 1969 Chevrolet Camaro in the front bumper, cowls induction hoods, wheel wells, and boxy rear, but it replaces the heavily creased lines with softer ones and a less pointed grille, while the rear and front fascia take cues from the 1st Gen Pontiac Firebird and Mk.1 Toyota Celica. The "Vigero by Declasse" badge featured on the grille and rear portion references the real-life "Camaro by Chevrolet" badge, while the "Super Sport" badging on the sides is a nod to the Chevrolet's SS performance marker. The rear and front fenders feature "VL1" badging, clearly imitating Chevrolet's ZL1 engine model. Interestingly, the car also features front-fender mirrors, a design mostly found on Japanese cars in the 1960s and 1970s.

The Vigero is a muscle car which inherits the general design and role previously filled by the Sabre in the 3D Universe (as the GTA IV Sabre is redesigned into a more modern sports coupe). The front of the car features dual open sections and a small silver/chrome bumper on the lower side, as well as a rectangle-shaped grille and dual circular headlights on the upper side, the latter being located in black housings and surrounded by a silver/chrome detail. The hood has an intake bulge on the center.

The sides of the car are rather simple, having slight flares on the arches and silver/chrome details at the bottom, as well as circular rear-view mirrors mounted over the front fenders. The cabin is relatively simple and features silver/chrome trim around the windows and on the inner pillars. A radio antenna can be seen on the driver side of the trunk area, right next to the trunk compartment.

The rear end of the car consist of a black panel with a silver/chrome horizontal divider on the center, separating the upper main/brake lights from the lower turn/reverse lights on the outer edges. The lower area consist of a flat silver/chrome bumper and the central license plate below it, as well as dual exhaust pipes below the car's bodywork.

The Vigero is one of a few cars in that can be found as a beater - a rusted out version of the original car with bent, rusted and dented bumpers, rotted weatherstripping, missing/broken door windows, duct-tape sealing around the pillars and channels of the windscreen, side-windows and A-B Pillar channel, and dirty/torn seats and damaged dashboard components on the interior. The outer housings have two functional lamps (which sometimes sag out of their fittings), while the inner ones will have either missing lamps or a driver-side, non-functional lamp hung by the remaining wires. Remaining wires are also found crossing the front grille. The front right and rear left wheels may also wobble and shake while driving due to loose lugnuts, bent rims, or other worn parts, while the rims have coats of rust on them. The car can be seen either with large patches of rust across the bodywork, heavy rust with no remaining parts of original paintwork or a combination of the rust patches from the first one and the rust consistency from the second one. The beater Vigero also features a unique, distorted horn not found on other beater vehicles. Unlike the other two beaters in the game (The Sabre and Emperor), the Vigero will never spawn with a license plate.

The beater Vigero may be seen in three different combinations of fenders:

All Vigeros, including the beater versions, come with anti-theft alarms, but the beater alarms sound heavily worn and out of tune. All Vigeros also spawn in single colors for the body and use five-spoke rims with medium-profile tires.

The Vigero appears almost identical to its GTA IV iteration, though the beater variant does not appear.

Again, the car has access to a single color for the body and retains the same wheel design, being identical to the "Azrea" muscle rims available in Los Santos Customs.

Like most muscle cars, the Vigero's engine is very powerful. Unfortunately, the Vigero's small tires and heavy metal body hinder the launch and handling of the car. However, the Vigero stays much flatter through the corners than the Sabre GT and Dukes, due to its smaller size, and is less prone to fishtailing than the Sabre GT. However, it is quite rigid on steering under braking pressure.

Like other beaters in the game, the rusty variant of the Vigero suffers from degraded performance. Acceleration is poor, reaching 60 mph in a very slow manner. The top speed, however, remains the same as the standard variant. Unlike the normal Vigero, the beater variant is rather smooth on steering under braking pressure, allowing for better cornering abilities.

The Vigero is powered by a single-cam V8 engine, coupled to a 5-speed gearbox in a front engine, rear wheel drive layout. Vigeros share the roary engine sound of muscle cars like the Stallion, the Sabre GT and the Dukes, although the beater variant has delayed sound and noisy crankshaft. The exhaust fumes are black, indicating that the car burns oil due to a bad head gasket on the oil channels. Like other beaters, the engine often stalls and backfires when shifting gears, this could be due to shot fuel injectors dumping more than normal amounts of gas or premature engine flooding. The backfire spits out a thick plom of brown smoke indicate a shot exhaust system possibly rusted through, or heavy carbon build up in the exhaust. A broken exhaust system is noticeable by the puffing sounds from the engine, this is caused by either a bad manifold seal or the manifold rusted through.

The Vigero is still a powerful muscle car, but this time the Vigero may spin-out easier than in GTA IV, due to its engine power improvement. It can accelerate much quicker, at the cost of a decreased top speed.

Again, the car is powered by a single-cam V8 engine, coupled to a 5-speed gearbox in a front engine, rear wheel drive layout. Its engine sound is generally high-revving and loud, shared with cars like the Dominator and the Ruiner. 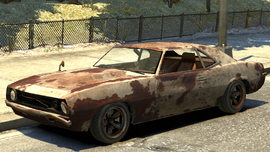 A customized Vigero owned by Tico. 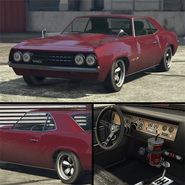 The Vigero on the updated Rockstar Games Social Club.

The Vigero in the cinematic preview on GTA V Rockstar Games Social Club.

The Vigero in the cinematic preview on GTA Online Rockstar Games Social Club.