The Boatyard in GTA Vice City.

$2,000 a day. (After completing Checkpoint Charlie)

Tommy uses the Boatyard as a port of entry for the cocaine shipments, which he then proceeds to distribute in Vice City. When Tommy finishes the boat race in Checkpoint Charlie, the business will generate up to $2,000 in assets.

The Boatyard also appears in GTA Vice City Stories but it is inaccessible and plays no role in the storyline, although it is sometimes featured in smuggling empire missions if the player has a smuggling building site in Viceport.

Tommy Vercetti buys the boatyard from Dwaine and Jethro. 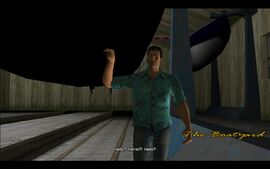 Tommy is checking out the boatyard he recently bought and is asking if anyone is there. 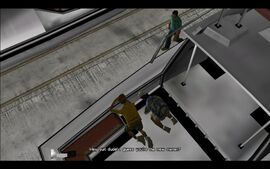 Suddenly, two young men emerge from a Reefer. One of the young men tells the other one to hide the marijuana they're smoking. They then ask Tommy if he's their new owner. 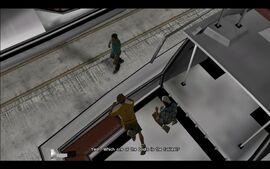 Tommy quickly replies that he is and asks the two men which of the boats in the boatyard are the fastest. 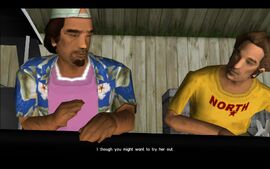 One of the young men tells Tommy that the fastest boats they have are already in the water, as he thought Tommy was going to want to try them out. 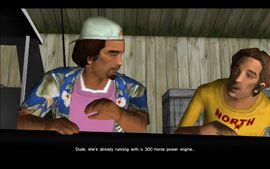 The other young man then starts talking about how good it is. 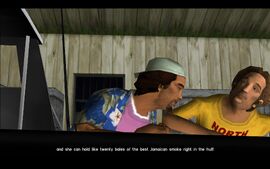 After he's done listing the boat's pros, he comments that it's good for transporting some marijuana. 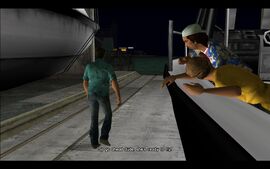 Tommy walks off and as he's walking, he's encouraged to try the boats out. 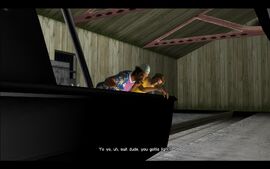 As Tommy walks, the two young men ask him if he has a lighter, but he doesn't reply, leaving the duo hanging. 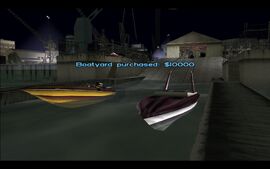 The boatyard is now under Tommy's control.