GTA Wiki
Register
Don't have an account?
Sign In
Advertisement
in: Missions in GTA Vice City, Races, Side Missions
English

To start a race, the player must go down into the lower part of the building and enter the pink cylinder to choose from up to six races. In order to enter a race the player must have sufficient funds. Each race has a different participation fee. After winning each race the player will receive the money from each competitor. So if the entry fee is $200 the reward will be $800. Below is the entry fee and the reward for first place. The Vice Street Racer's motto is "Earn Cash, not Kudos". Along with the name, this is probably a reference to Metropolis Street Racer.

The map where races can be selected is the beta map of Vice City instead of the final rendition of the map.

This race takes place around Escobar International Airport hence the name "Terminal" referring to the airport's terminals. This race is the shortest one on the board, with a length of only 1.748km (1.086 miles).

This race takes place around Little Haiti and Little Havana; the track is 3.1km (1.926 miles) long.

This race takes place around Washington Beach and Vice Point; the track is 4.603km (2.860 miles) long.

This race takes place around the whole of Vice City with every neighborhood included (minus Fort Baxter Air Base and Leaf Links). This race is the longest of all Vice Street Racer events, with a track length of 9.721km (6.040 miles). 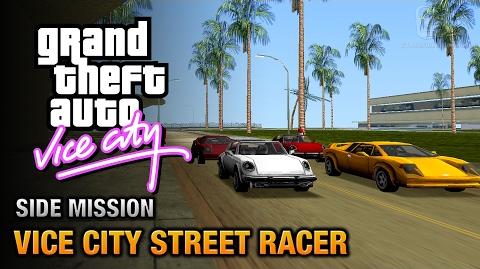