The Vice Point WK Chariot Hotel in the PC version of Grand Theft Auto: Vice City. The glitched sign on top of the building, showing only the "ot Hotel" portion of the name, was intended to be used in the PlayStation 2 version to display the "Langer" text from the original "Vice Point Langer" sign.

Located in Vice Point, Vice Beach, Vice City. The hotel's name differs between the original PlayStation 2 version and the PC version, with the PS2 version being known as Vice Point Langer, while the PC version has been renamed as the WK Chariot Hotel, the WK Chariot name being an obvious spoof of JW Marriot's, also a hotel and lodging company. The hotel received a third renaming when it is once again featured in GTA Vice City Stories, where it is known as Van Khoff on the Beach.

Due to the differences in name, the WK Chariot brand may or may not imply that it is a hotel chain, as another smaller hotel in Ocean Beach, also in Vice Beach, bears the "WK Chariot" name in all versions of GTA Vice City.

Located across the street from the Malibu Club to the east, the Vice Point Langer is depicted as a colossal hotel building fronting the beach. The building is used once in GTA Vice City's storyline, being a good spot to take blackmail photos of Alex Shrub in the mission "Martha's Mug Shot" by accessing a simple interior: a staircase at the side of the hotel that goes up many floors and a hallway at the end. After completing "Martha's Mug Shot", the hotel will always be accessible but the window is closed. In the PC version, the window remains opened. Other than that it doesn't serve any purpose in either games. In GTA Vice City, the hotel has a non-solid section at the front entrance of the hotel large enough for a helicopter to fit and enter into Blue Hell. This glitch was fixed in GTA Vice City Stories.

In GTA Vice City Stories, the building itself is barely anything different than it's previous depiction. Only that there is a different name, "Van Khoff on the Beach" written on gold plaques instead of above the front entrance, implying that hotel is part of the Vank Hoff Hotel chain, although the spelling is slightly different.

The other WK Chariot Hotel is a small, three story Art Deco building located at Ocean Drive in Ocean Beach. It is an almost exact clone of the Parsons Hotel but with a green color instead. Unlike the Vice Point hotel, the Ocean Beach hotel retains the WK Chariot name in both the PS2 version and the PC version. The GTA Vice City Stories rendition lacks the "WK Chariot" name altogether.

The Langer sign at the top of the hotel in the PS2 version of GTA Vice City.

The illuminated "Vice Point Langer" sign over the main entrance of the Vice Point hotel in the PS2 version of GTA Vice City.

The illuminated "WK Chariot Hotel" sign over the same main entrance in the PC version of GTA Vice City. 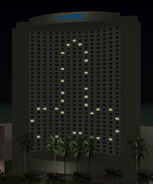 The Ocean Beach "WK Chariot" in GTA Vice City (whose name remains the same in both the PS2 version and the PC version).

The "Van Khoff On The Beach" plaque at the base of the Vice Point hotel in GTA Vice City Stories. Note also the absence of the hotel sign over the main entrance in the background.

Appear of the Hotel, view from the mainland

This shows "WK Chariot Hotel" With the penis outline before it changes to just a random pattern.
Add a photo to this gallery
Retrieved from "https://gta.fandom.com/wiki/Vice_Point_Langer?oldid=1161281"
Community content is available under CC-BY-SA unless otherwise noted.