For the VCPD in GTA 1, see VCPD in 2D Universe.
For information about how the VCPD pursue the player, see Wanted Level in 3D Universe.

As Vice City is meant to mimic the city of Miami, the VCPD can easily be assumed to be based on the Miami-Dade Police Department. As in GTA III, the VCPD's reach in the city extends to the waters of the city and also the air.

There are police stations in each of four locations throughout Vice City: Little Havana, Downtown, Vice Point and Washington Beach.

The VCPD's car of choice circa the 1980s are green and white Police/VCPD Cruisers that can be obtained from every police station, although they are occasionally locked (there are two at every station in GTA VC, and one at every station in GTA VCS). The police car is very fast and light, prone to easy flipping and launching off the ground. However, it is extremely durable, making the VCPD a force to be reckoned with, except for under heavy gunfire. In Vice City Stories, officers also travel in VCPD WinterGreens, but do not chase the player at a two-star wanted level. They are all black with red lights and one can always be found at every police station (except Washington Beach).

VCPD officers wear uniforms consisting of a dark tan shirt, brown pants, and gray shoes. These officers carry a nightstick and a pistol and they will do anything to take down criminals on sight. They commonly travel alone in their cruisers, but travel in pairs when pursuing a player with a two-star wanted level or above. They are also seen walking a foot beat, often pursuing fleeing criminals.

Police officers of the Marine Unit patrol the waters around Vice City in Predators and will shoot the player using the Predator's machine guns if the player enters the waterways with a two-star wanted level. They are white on top and blue on the bottom, and can be found below the Links Bridge in Leaf Links in GTA VC, but in GTA VCS they can only be found patrolling the waters. At a three-star wanted level, the VCPD will begin to set up roadblocks and deploy Spike Strips. The VCPD Chief commissioner in 1984 is called McGinley, as referenced by VNN. It is unknown if he still holds the position in 1986.

The VCPD also houses Vice City's Vice Squad, which appears at a three-star wanted level. Vice Squad members drive VCPD Cheetahs and are armed with Micro-SMGs and always travel in pairs. They are apparently headquartered at the Little Havana station, as a VCPD Cheetah can be found in the back in VC, but in VCS the Cheetah is only found while pursuing the player at a three-star wanted level).

At the downtown station, a Police Maverick is stationed on the roof. These helicopters are deployed at a three-star wanted level and will shoot the player from the air using its machine gun under the fuselage. The helicopter is mainly green in GTA Vice City, but in GTA Vice City Stories, it is mainly tan.

Additionally, the Downtown station is home to Vice City's S.W.A.T. team, which appears at the four-star wanted level. These highly trained officers travel in fours in the fast and durable Enforcer, wielding SMGs. At a four-star wanted level, they will replace the police cruisers in roadblocks, while still appearing alongside the cruisers on the streets. When the player stays in one place at a four-star wanted level, S.W.A.T. officers will rappel down from the police helicopters. They are lethal to a player on-foot, even with armor, and can destroy a car in a matter of seconds. The Enforcer in GTA VC sports a green and white body color, while the GTA VCS rendition is black and white.

It is also hinted, according to the official Vice City website, that there is another branch of the VCPD, the Vice City Bureau of Investigation (VCBI), who are investigating Vice City's criminal underworld and the events that unfold during GTA Vice City. As seen through the window of their office, the VCBI is located somewhere along Ocean Drive in Vice City. It is unknown as to whether the VCBI is a separate entity of its own, or if it is a branch of the VCPD. 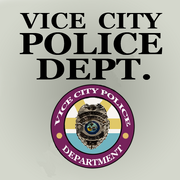 The police car from the Rockstar game Manhunt with the Vice City police car model.
Add a photo to this gallery

A "VCPD WinterGreen" ridden by a police biker.

Artwork of cops in GTA Vice City Stories note the use of Python.
Add a photo to this gallery

Retrieved from "https://gta.fandom.com/wiki/Vice_City_Police_Department_(3D_Universe)?oldid=850082"
Community content is available under CC-BY-SA unless otherwise noted.