The Vice City Police Department has six police stations in total, 3 in Miramire, Coral City, and Vice Beach, while the other 3 are in Richman Heights, Little Bogota, and Banana Grove. They wear the same uniforms, and use the same tactics and equipment as the LCPD and SAPD do.

The VCPD uses Squad Cars that are colored blue and white but features a modified body that appears wider and rounded. 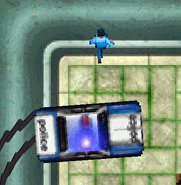 A Vice City Police Department officer alongside a police car in GTA 1. Note that the LCPD and SAPD in game also wear uniforms identical to that of the VCPD.
Add a photo to this gallery

Squad Car
Add a photo to this gallery

Machine Gun
Add a photo to this gallery

Retrieved from "https://gta.fandom.com/wiki/Vice_City_Police_Department_(2D_Universe)?oldid=1246311"
Community content is available under CC-BY-SA unless otherwise noted.