The landmass is divided into the poorer side (Little Havana and Little Haiti), the more affluent (Downtown) and the industrial (Viceport). This is the first section of Vice City available to the player in GTA Vice City Stories and the second in GTA Vice City.

Most of Vice City Mainland is populated by working-class citizens and hobos, who are seen even in the more affluent area of the island, Downtown.

The island is the first part of the map the player visits in GTA: Vice City Stories and is the home of the protagonist Victor Vance in 1984 when he first arrives in Vice City to join the military in Fort Baxter Air Base. During the first act of the game, the island is mainly closed off, except for the Starfish Island, which has its' gates open in the western side. The bridges leading in and out of the island are once again reopened after the events of From Zero to Hero.

The island is closed off in 1986 during the first part of GTA: Vice City due to the fear of a hurricane hitting the city, however after the events of Phnom Penh '86, the hurricane passes Vice City and all bridges are once again reopened. After the bridges are opened, Tommy Vercetti starts expanding his empire into the island and purchases a boatyard, a cab depot, an ice cream factory and a print works.

Vice City Mainland is also the home to many landmarks and places of interest in Vice City. Some of these include: 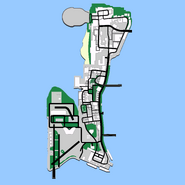 The map of Vice City Mainland.