GTA Wiki
Register
Don't have an account?
Sign In
Advertisement
in: Pages with unsourced statements, Locations, Cities,
and 2 more
English

The City of Vice, commonly known as Vice City or simply Vice, is a city located in the state of Florida that is mentioned in the HD Universe of the Grand Theft Auto series.

As the HD Universe and 3D Universe are distinct settings and follow a separate canon, it is possible that Rockstar will redesign the city in the same way they did with Liberty City and Los Santos if it is to make an appearance in a future Grand Theft Auto game.

In Grand Theft Auto V, on the in-game TV show Gordon Moorehead Rides Again, which is set in 1947, the two main characters refer to Vice City as a swamp-like area, though the authenticity of this is debatable.

A transportation company from Vice City, Vice City Metromule, is mentioned on the Nut House livery for the Nightmare Scarab in Grand Theft Auto Online. This implies that Vice City has a train system, based on the real-life Miami-Dade Metromover, in the HD Universe canon of the GTA series.

Vice City is based on the real-life city of Miami, Florida, and as such is referred to as being "down south". 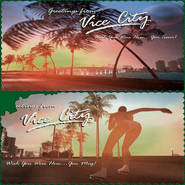 References in The Lost and Damned

References in The Ballad of Gay Tony 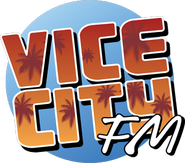 Toni on a billboard in Hawick. 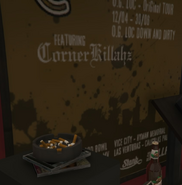 OG Loc tour poster on the wall of 3671 Whispymound Drive.[1] 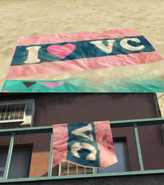 One of The Twins from the cover art of GTA Vice City used in advertising.

Vice City as depicted in the Race and Chase arcade game series in Grand Theft Auto Online. The Gash Blimp can be seen flying by Downtown. The skyline seen in the screenshot is actually Downtown Los Santos from Grand Theft Auto: San Andreas (albeit with slightly altered and reskinned visuals and textures).[2]

Excellence Award from Vice City Hikers, which has been awarded to Chumash and Arthur's Pass Trails. 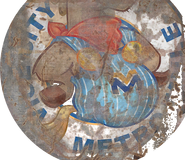 Part of the worn Vice City Metromule logo, which appeared in GTA Online on a livery for the Nightmare Scarab.