Standard White - 100%
“What's waiting inside this transporter? An expertly trained spec ops force? A yard-deep wall of primed sticky bombs? A mountain of product and a dozen of Vanilla Unicorn's star employees? Whatever you want. Or, whatever you want to tell people.”

The HVY Vetir is a military truck featured in Grand Theft Auto Online as part of The Cayo Perico Heist update, released on January 28th, 2021, during the Vetir Week event.

The vehicle is seemingly based on the Saviem SM8/Renault TRM-4000, seen in the general shape and purpose.

The Vetir is depicted with a cab-over-engine layout and a rear bed with benches similar to the Barracks. The front of the truck features a small bumper with a winch on the centre, and square headlamps with what seems to be mesh screens for protection. The cabin features wide horizontal separations for the grille and small panels beside it, along with small lamps below the windscreen that work as high-beam lights. The sides of the cab makes use of bulky fenders, small side steps for access and black rear-view mirrors on the cabin area, along with rear-quarter windows. The interior of the cab uses the standard "Truck" analog dials.

The rear section mostly consists of the rear bed with small marker lights, seat benches and a canvas top, which is supported by black, thin frames. Large black mudguards are seen next to the rear wheels, along with the corresponding fuel tank on the right side and a spare wheel on the left. The rear end shares a similar layout to the Barracks, featuring small panels supported by thin frames and housing circular tail lamps, with the inner ones activated when the lights are on. Red-white warning strips can be seen on the bed, just below the rear tailgate.

The truck struggles to get up hills due to its weak engine, although given enough time, it can reach a respectable speed on flat ground. Being designed as an off-road truck, it possesses good grip off-road, but due to its high center of gravity, it is slightly unstable in corners and on uneven terrain. 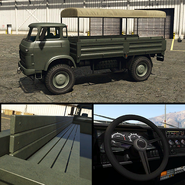 The Vetir on Warstock Cache & Carry.

The Vetir in the cinematic preview on GTA Online Rockstar Games Social Club. Note the trunkbed customizations on the vehicle, which are unavailable for purchase.

A player using the Vetir to access El Rubio's Compound during Finale.

The truck was originally planned to be able to be stored and modified as a Personal Vehicle, not a Pegasus stored vehicle. This is clear from:

The full RGSC vehicle stats and flags of the Vetir.