S_M_M_Gentransport (Pilot)
“Low wing, very light jet aircraft for the business traveller. Perfect for ferrying your favorite hookers out to meet you in Las Venturas, picking up uncut blow south of the border, or doing the school run. Doesn't come cheap, but be honest, you're getting this so people know how rich you are.”
— Elitás Travel description.

The Vestra is heavily based on the Cirrus Vision SF50, while its nose, engines, and windows seem influenced by the Eclipse 500.

The Vestra takes the form of a small personal very light jet with a seemingly compact fuselage, having a rounded nose and underside hatches for the nose landing undercarriage. Around the main section, the aircraft's cockpit has a split windscreen, two access doors for the pilot and the copilot, and two windows on each side of the aircraft. The wings are mounted on the lower portions of the fuselage (low-wing setup) and house the outer ailerons, the underside hatches for the main landing undercarriage, and circular taxi lamps on the main gear struts, similar to the Shamal and the Luxor. In the rear, the engines are mounted on either side of the tail boom, followed by the V-shaped tail/empennage (often called a ruddervator), considered practical in real aviation by many pilots due to its decreased parasite drag (resulting in increased cruise speed over a conventional 3 surface empennage), yet these often result in a decrease in stability, thus making the aircraft harder to recover once departed from the normal flight envelope. The Vestra can have one of the following registration numbers on the right wing and the engines: F-LS522, M-LS912, N-LS482 and R-LS210.

The interior of the cockpit features a small flight instrument panel in the centre and can hold two occupants in the front (even though there are two more seats in the rear). In the enhanced version, it uses the same "Flyer" dial set as the Maverick and the Police Maverick, arranged in a way where the main dials are located around the centre, the small gauges on the outer portions, the "Gear Up/Down" displays above the dials, and numerous blue displays/buttons below.

The Vestra is a very agile plane thanks to its small size and short wingspan. The powerful engines, combined with the overall size, make the power to weight ratio impressive, resulting in an extremely fast and lightweight aircraft. Additionally, the Vestra is also one of the most manoeuvrable aircraft in the game, being even comparable to the Mallard. With responsive controls, it changes direction and does aileron rolls extremely fast, and can glide better than expected. This makes the Vestra ideal for air races, stunts or flying through the middle of the downtown area, and has an almost immediate throttle response in comparison to most aircraft, which often require a few seconds after the engine start-up. The aircraft is also surprisingly resistant, being able to take up to three missiles from a Buzzard Attack Chopper before being completely destroyed. The first two missiles will be resisted, while the third one will destroy the plane.

Unlike other fixed-wing aircraft in the game, however, the Vestra cannot be flown upside down more than momentarily, as the ruddervator does not have enough aerodynamic authority to raise the nose while inverted. This also hinders its knife flight capabilities, often losing altitude over time and unable to correct itself.

The Vestra is powered by two turbofan engines, which are smaller sized than the ones from the Luxor or the Shamal. It also shares the same engine sound as the aforementioned jets.

Upon being converted into a personal aircraft, the Vestra can be repainted with a primary and a secondary color. It also has four liveries, which are the aforementioned registration numbers.

The Vestra as seen in a pre-release screenshot.

The Vestra in a black/yellow colour scheme. 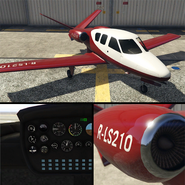 The Vestra on Elitás Travel.

The Vestra on the updated Rockstar Games Social Club.

The Vestra in the cinematic preview on GTA V Rockstar Games Social Club.

The Vestra in the cinematic preview on GTA Online Rockstar Games Social Club.