Location on the map (in-game GPS). The neighborhoods of Vespucci: Vespucci Beach and Vespucci Canals. Puerto Del Sol does not have in-game map boundaries, and it is mistakenly referred to be part of La Puerta.

The small unnamed area(?) is part of Vespucci Beach.

“Vespucci is a beach town and all-round freak show where tourists come to take photos of bodybuilders, performance artists and hobos, and to buy medical marijuana. The famous Vespucci Canals were created at the turn of the century in a desperate attempt to bring some semblance of European culture to the western United States.”
— GTA V digital manual

Vespucci is an area more suited towards tourism, resorts, and vacations. Because of this, many stores and hotels are located in Vespucci. The most famous area is the Vespucci Beach Sidewalk, where tourists walking along the beach go to shop for souvenirs, bicycles, and ice cream. When people are tired of walking the beachfront, they sit on the various benches that dot the sidewalk. Vespucci can get very crowded at daytime, especially on the beach.

Vespucci is split into three sub-districts:

On November 19, 2020, a corpse and a briefcase appeared on the southwest coast of Los Santos at a random location ranging from Vespucci Beach to Los Santos International Airport.

The neighborhood is mostly based on Venice, California.  The southernmost region (Puerto Del Sol) is based on the unincorporated community of Marina del Rey, California. 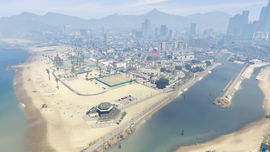 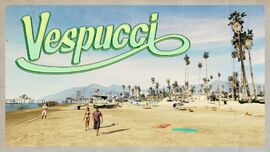