Standard White - 100%
“The Dinka Verus, a resilient off-roader that can withstand a barrage of brutal rolls, savage spins and implausibly catastrophic head-ons. Of course, its exposed driver can't. But keep in mind that it's a two-seater, so you can share the injuries with your buddy.”

The Dinka Verus is a military ATV featured in Grand Theft Auto Online as part of The Cayo Perico Heist update.

The Verus appears to resemble the Arctic Cat Alterra 570, seen in the overall profile, front end and purpose, while its tail lights may take some inspiration from the Polaris Sportsman 570.

The vehicle is depicted as a large utilitarian ATV with a similar shape to the Blazer Lifeguard. The front end is quite predominated by a black plastic section between the large mesh grilles and below the headlights, with the middle section acting as the bumper/defense of the vehicle. The area above the front end is occupied by a "DINKA" decal above the upper grille, a small intake and a large utility rack.

The sides of the vehicle are generally bulky, featuring plastic arches and side steps for access, as well as side exit vents and the corresponding manufacturer decals. The upper area is occupied by a plastic panel, which features a set of handlebars over a large pivot that is fitted with a digital display, along with what seems to be a gear shifter on the left side of the front panel. It also features a light grey seat, a black fuel cap on the left side and a plastic rear panel fitted with a second utility rack.

The rear end of the vehicle features a set of plastic exit ducts, fitted with a set of light strips on the upper areas and a license plate on the lower side of the central duct. Part of the vehicle's chassis is also exposed, as well as the suspension shocks/springs and a single exhaust pipe.

The primary color of the vehicle is applied on the body, while the secondary color is applied on the chassis. It uses a set of rims identical to the "Concave Steelie" off-road wheels available in Los Santos Customs, and can also support a dedicated color, although only naturally-generated examples may have one.

The Verus can easily be described as one of the heaviest ATVs. Because of this, the Verus's acceleration is relatively average but with a good turning radius. Because of its weight, it cannot pull off wheelies. Its tyres are also exposed, and bulletproof tyres are recommended to avoid them being shot and punctured. Even with upgrades, it is still not considered a contender for races, but its weight makes it surprisingly durable against collisions, with less chances of being dismounted unless the Verus falls off-balance when airborne or is hit by a faster and stronger vehicle.

The Verus appears to be powered by a parallel-twin engine similar to the one on the Street Blazer, coupled to a 5-speed gearbox and powering all wheels with a torque distribution of 45% to the front and 55% to the rear. It shares the same engine sound from the Bagger and the Hot Rod Blazer, albeit with generally lower engine revolutions due to its limited performance.

The Verus shown in the update’s official artwork.

Appearing on the island of Cayo Perico. 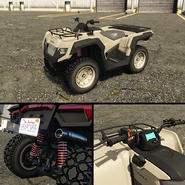 The Verus on Warstock Cache & Carry.

The Verus in the cinematic preview on GTA Online Rockstar Games Social Club.