verlierer2
“The Verlierer has all the looks of a 60s roadster, with the added advantage of being able to drive around corners. Combining its sophisticated looks with tight handling and the forward momentum of a hungry leopard, the only thing getting in your way here is your lack of coordination and fear of becoming a road accident statistic.”
— Legendary Motorsport description.

The Bravado Verlierer (pronounced as fur-lee-rah) is a two-door sports car featured in Grand Theft Auto Online as part of the Executives and Other Criminals update.

The vehicle takes a heavy influence from the TVR Sagaris and the Wiesmann GT MF, sharing the iconic curved headlights and swept-down front profiling of the Sagaris, as well as the passenger cell and sloped rear end of the Wiesmann.

The Verlierer features a relatively long front with an aerodynamic profile, featuring large intakes on either side and a small extension at the bottom. Carbon-fibre housings with circular lamps are seen on the upper area, as well as the manufacturer emblem on the centre and a thin intake leading to the engine bay, just in front of the bonnet.

On the sides, the fenders are significantly wide and have rear vented exits. The greenhouse area is relatively simple, featuring black fittings for the windows, black middle pillars and rounded rear-view mirror shells. Silver "VERLIERER" badges can be seen behind the front fenders.

The rear of the car is curved, denoting the rear vented exits and the set of tail lamps on the edges. The centre of the car features the corresponding boot hatch, a curved boot lip, the manufacturer emblem and the license plate. A black six-element diffuser is seen at the bottom, leaving room for the central exhaust tube. The interior uses the same textures and dials from the Feltzer.

The primary colour of the car is applied on the bodywork, while the secondary colour is applied on the front extender, rear-view mirrors, interior stitching, engine cam covers, brake calipers and a portion around the centre of the wheel. It uses a set of dual eight-spoke rims with a bolted-on surrounding and concave centre, with low-profile tyres fitted to the vehicle.

The Verlierer has the engine power to give it acceptable acceleration, but high top speed. The Verlierer's handling is impeccable, being very responsive with a good cornering radius. However, the car loses a large amount of speed through corners, which makes it lag behind in tighter tracks. Crash deformation is poor, and will only take a few hits (sometimes as few as one) to be deformed in a performance-impacting way.

The website claims that the Verlierer has a 3-liter V8 engine capable of pushing 240bhp. The engine model, however, appears to be a single-cam V12 with 6-double barrel downdraft carburetors/throttle bodies. The engine model itself is shared with the Z-Type and JB 700, but is updated with chrome exhaust manifolds instead of the original copper-coloured manifolds found on the aforementioned vehicles. It also features new polished rocker covers, which will be coloured according to the vehicle's primary colour.

The Verlierer's engine sound is unique to this vehicle. It appears to be a heavily edited variation of the sound used on the Rapid GT, F620 and Exemplar, being heavily muffled and revving slightly lower.

Screenshot of the Verlierer from a pre-release trailer.

The rear view of the Verlierer from the same trailer. 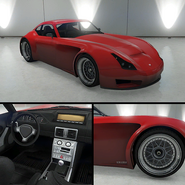 The Verlierer on Legendary Motorsport.

The Verlierer on the updated Rockstar Games Social Club.

The Verlierer in the cinematic preview on GTA Online Rockstar Games Social Club.