View source
watch 02:17
New Pokemon Games - The Loop
Do you like this video?
Play Sound
For the mission, see Verdant Meadows (mission).

The airstrip is located north of Area 69 and east of El Castillo del Diablo.

The airstrip is made up of a single, dirt runway, a control tower and several hangars. Around the runway are multiple air wrecks resembling the Andromada, but without the black spot on the nose and with a different tail assembly.

While flying an airplane in the game, the airstrip will show up as an airport landing strip on the HUD, similarly to the airports in San Fierro, Las Venturas, and Los Santos.

The airstrip also becomes a safehouse after being purchased, allowing the player to save their game. Upon purchase, Verdant Meadows provides a save point, access to Flying School, a landing site, a garage for vehicles, a hangar for up to four planes or any land vehicles including large vehicles that cannot be safely stored in normal garages. This is the only safehouse to provide two usable garages.

By 1992 the airstrip has been put up for sale, prompting government agent Mike Toreno to have Carl Johnson purchase it for $80,000. The airstrip may not be bought before Toreno asks Carl to do so. Once bought, Toreno has CJ take lessons from the Pilot School, forcing the latter to obtain a bronze medal in each of the 10 lessons. After that, Toreno orders CJ to fly a Rustler to airdrop some supplies over Angel Pine before returning safely to the airfield. Following Carl's return, a rival agency decides to land at the airfield with an Andromada. On Toreno's orders, Carl stowaways his way into the aircraft with a motorcycle, then plants a satchel charge aboard the aircraft before parachuting.

The Truth later comes to Verdant Meadows, berating Carl for accepting to work for a government agent, then tells him about Area 69 and has him steal a Jetpack from Area 69's underground research labs. Using the Jetpack, Carl attacks an army Freight train to steal a jar of "green goo" and deliver it to Truth at the airfield. Following the completion of this mission, the airstrip becomes an asset, generating up to $10,000.

The airfield is featured later on when CJ steals an army Leviathan and uses it to airlift a Securicar to the airstrip, in order to carry out a heist on Caligula's Casino. The airstrip is featured again when CJ and his associates carry out the heist, where they meet at the airstrip at the end of the mission.

Verdant Meadows makes a final appearance when CJ safely lands on the airstrip with the Hydra he previously stole from Easter Basin Naval Station on Toreno's orders.

The airfield and aircraft graveyard is possibly based on Kingman Airport in Arizona.

The control tower and safehouse building is based on the WWII-era tower and operations building of in Utah.

A flying lesson from the Pilot School.

A Hydra and a Rustler in the side hangars.

Large hangar used for storage of land vehicles and aircraft.

Interior of the main hangar, with various vehicles stored to denote its functionality.

The Jetpack located between the garage and the water tower. 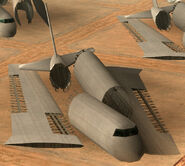 Aircraft wreck found near the airstrip. Notice the Andromada-like design.