S_M_M_Gentransport (Pilot)
“The Velum is a high-performance single-engine light aircraft manufactured specifically to fulfill the needs of executive travel because, let's face it, that's the only investment in aviation that happens these days. New larger model with 5-person capacity.”
— Elitás Travel description.

The Jobuilt Velum 5-Seater is a fixed-wing aircraft introduced in Grand Theft Auto Online, taking the form of a light propeller driven, single-engine monoplane. It was added as part of the Heists Update.

The Velum 5-Seater is based on the original Velum, except that, as the name suggests, it has five seats. The aircraft has two main seats in the front, two rear-facing seats and another seat in the rear right side of the plane, as well as wooden furnishings and beige leather finish, similar to the Luxor. There is also a functional rear door on the left side, which has two steps on it. Because of the rear left door, there are only two small windows on the left.

The Velum follows the same color set and distribution as the normal Velum, as well as the same wheel design and registration numbers.

Just like the standard Velum, it is one of the fastest light aircraft, having a top speed just below that of the Mallard. It is a decently maneuverable aircraft, and has very responsive turning and handling. Its long wingspan may prevent it from being as agile as other planes in the game, but it is very stable in flight. It does, however, need a relatively long strip of land in order to take off. Its durability is average, as it can take a modest amount of gunfire before its engine fails and it becomes unflyable. Care should be taken when landing the plane, as the front propeller is prone to scratching the ground until being broken. The Velum 5-Seater shares the same handling line as the regular Velum.

Again, the Velum 5-Seater shares the same turboprop engine as the regular version, albeit still using the piston engine sound from aircraft such as the Duster and the Mallard.

Upon being converted into a personal aircraft, the Velum 5-Seater can be repainted with a primary color and a secondary color, but the stripes cannot be changed. It also has four liveries, which are the aforementioned registration numbers.

The Velum 5-Seater in the original version of GTA V. (rear quarter view) 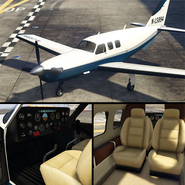 The Velum 5-Seater on Elitás Travel.

The Velum 5-Seater on the updated Rockstar Games Social Club.