“The Velum is a high-performance single-engine light aircraft manufactured specifically to fulfill the needs of executive travel because, let's face it, that's the only investment in aviation that happens these days.”

The design of the aircraft is mostly a combination between the TBM 85 and the Piper PA-46 Malibu Meridian, with an empennage similar to that of a Piper PA-31 Navajo, and the Cessna 414.

The Velum is depicted with a rather long fuselage, where the front section consist of a long nose housing the four-bladed propeller, the exhaust pipes on either side and the underside hatches for the nose landing gear, which is also fitted with a single taxi light. Around the main section, the aircraft features large wings with black portions on the front and underside hatches for the main undercarriage, while the cabin has two access doors for the pilot and the copilot, three small windows on the left and four small windows on the right. The tail boom/empennage is relatively short, housing the rear stabilizers that also have black portions on the front.

The interior of the aircraft uses the corresponding "Flyer" dial set from aircraft like the Maverick, the Police Maverick and the Annihilator, arranged in a way that the functional dials are located around the center of the instrument panel, along with the "Gear Up/Down" displays above them, towards the left side. In addition to the two pilot and co-pilot seats, two more passengers can seat in the back, which will simply teleport directly to the rear seats, as there are no back doors.

The Velum spawns with an array of color combinations, being the primary one for the upper side of the fuselage, the wings and the tail section, while the secondary one is applied to the lower side of the fuselage, the wing tips and the upper section of the tail. The stripe seen on the fuselage is actually classed as the "wheel" color. Black portions can be seen on the front face of each wing. It uses a set of plain industrial wheels, also shared with the Cuban 800 and the Mammatus.

The Velum bears a registration number in the vertical stabilizer and the right wing. Said registration is "N-LS" and one of the four combinations of numbers, being: 281, 342, 782 and 894.

The Velum is one of the fastest light aircraft in the game, having a top speed just below that of the Mallard. It is a decently maneuverable aircraft, and it has very responsive turning and handling. Its long wingspan may prevent it from being as agile as other planes in the game, but it is very stable in flight. It does, however, need a relatively long stretch of land in order to take off. Its durability is average, as it can take a modest amount of gunfire before its engine fails and it becomes unflyable. Care should be taken when landing the plane, as the front propeller is prone to scratch the ground until being broken. Given its speed and capability to carry four passengers, it is a fairly good crew transport vehicle in Grand Theft Auto Online, being faster than the average helicopter, even although obviously less versatile.

Although the Velum appears to have a turboprop powerplant, the engine sound reflects that of a piston powerplant, like those of the Duster and the Mallard.

Upon being converted into a personal aircraft, the Velum can be repainted with a primary color and a secondary color, but the stripes cannot be changed. It also has four liveries, which are the aforementioned registration numbers.

A front view of the plane in flight.

The airplane in flight with other aircraft. 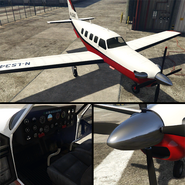 The Velum on Elitás Travel.

The Velum on the updated Rockstar Games Social Club.

The Velum in the cinematic preview on GTA V Rockstar Games Social Club.

The Epsilon Blue Velum owned by the Epsilon Program.