Vehicle Mines are small explosive devices than can be placed on the ground. Based on the HUD icon, it appears to be a land mine with a red light on it.

Other five type of mines were added in the Arena War update, which shares the same functionality, but their effects are different compared to the traditional explosive version. These are: Kinetic, Spike, EMP, Slick and Sticky.

If a car or pedestrian comes into contact with the mine, it will blow them up. Mines can be used to explode pursuers or to block an entrance to a weapon in a multiplayer game for example. When a mine is placed under a stationary car without a driver, the mine will only explode when someone enters the car. This is a neat trap to be used in multiplayer. Its damage per "round" is 10+.

Proximity Mines act similarly to the GTA 2 iteration, where they can be deployed from a selected range of weaponized vehicles and explode upon proximity of pedestrians and vehicles. They appear to be a bit stronger than their standard counterpart, as 7 are able to destroy an APC (while regular hand-held Proximity Mines are able to destroy said vehicle with eight mines, placed on its front). Players should have to be careful, as vehicle mines are immediately armed upon being placed, which can damage or destroy a slow-moving vehicle (being a fatal mistake for the Dune FAV or the Weaponized Tampa). It is better to use on high-speed chases, as the enemy will likely not be able to tell where the mines are being placed and they have to pursue one from a different lane. Narrow areas are also good getaway routes, as one can simply place the mine and restricts the pursuing enemy from using that route. Even if armored vehicles can withstand a few mines, they will be disrupted by the explosion.

Variants from Arena War vehicles have different characteristics, which depends of the current type:

Note these mines are only functional in free-roam; during contact missions, heists and races, the mines are disabled and the horn is reactivated. 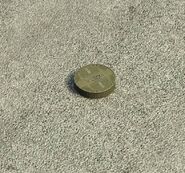 Proximity mine when placed.
Add a photo to this gallery

Retrieved from "https://gta.fandom.com/wiki/Vehicle_Mines?oldid=1259656"
Community content is available under CC-BY-SA unless otherwise noted.