View source
watch 02:56
Raise a Floppa - The Loop
Do you like this video?
Play Sound
Not to be confused with the Specter, another two-door sports car in Grand Theft Auto Online.

Standard White - 100%
“Too extra for the classics? More over-the-top than underground? Forget trying to find that scrapyard bucket and make the only first impression that counts in the Emperor Vectre. Like a supermodel with a mean 100m sprint, this is the kind of narcissism that'll ride you till you're raw and leave you with nothing but gratitude.”
— Legendary Motorsport description.

The Emperor Vectre is a sports car featured in Grand Theft Auto Online as part of the continuation of the Los Santos Tuners update.

The Vectre is based on the Lexus RC F. The headlights seem to be taken from the facelifted 2019 RC F, with the layout is similar to that of the North American 2013-2016 Toyota Corolla (E170), while the lower part of the grille seems to be inspired by the twelfth generation Toyota Corolla (E210). The side vents are derived from the BMW M8 (F91/F92/F93). The rear fascia, though entirely similar to the RC F, has a trunk design taken from the first generation Toyota 86/Subaru BRZ/Scion FR-S (ZN6/ZC6).

The Vectre assumes a modern and sporty design, where the front of the car features a black splitter with two protruding sections on the outer sides, as well as small outer intakes above intended to cool off the front brakes. The front is largely predominated by a mesh grille spanning about half the car's width and the entire height of the front end, bearing a silver surrounding and the manufacturer logo on the upper area. The sections beside the upper half of the grille have long headlight housings with inner square-shaped units, middle circular units and outer turn signals. On the hood area, there are elevated hood lines starting from the area between the grille and the headlights, which curve towards the outer sides of the car, while two smoother lines start from the central section of the grille trim and curve slightly away from the central intake, also going towards the windshield. The same hood opens to reveal the engine bay with a strut brace and the winshield wipers are mounted on a carbon-fiber strip seen at the base of the windshield.

On the sides, the car has long exit vents on the front fenders with numerous separations finished in black, along with character lines on the skirting area that curve from the same vents and almost reach the rear wheel arches. There are also additional body lines on the upper side, which start from the upper detail of the front vents and lead towards the tail lights, passing through the painted door handles. On the greenhouse area, the car makes use of black trim around the windows, thin inner separations for the rear-quarter windows and large door-mounted mirror shells with a silver detail on them. The roof area has black lines that separate the carbon-fiber roof panel from the rest of the car, together with a single fin/vortex generator on the rear area.

The rear of the car consist of a large trunk lid with a slightly elevated lip on the upper side and a trapezium shape on the rear, the latter bearing the manufacturer logo on a sectioned panel and a dedicated section for the license plate. The car has red main lights and amber turning signals on the outer sides, as well as brake/reverse lights mounted directly to the trunk lid. On the bumper area, the car has narrow exit vents on the outer edges and a black section with red strips on the upper side, vertical elements on the center and two openings for the exhaust pipes.

The interior and dial set are shared with cars like the FMJ, the Tempesta and the Toros, with the carbon paddle shifts derived from the last two cars. Similar to the Jester RR, the interior itself is a white/paintable variation of the aforementioned cars, and bears the manufacturer emblem on the horn cap.

The primary color of the vehicle is applied on the bodywork and the engine cam covers, while the secondary color is applied on the brake calipers. A trim color is also available for most of the interior, the horn cap and the overstitches, as well as a dial color. It uses a set of ten-spoke rims with additional angled spokes finished in black, wrapped in low-profile tires. These rims can also support a dedicated color, although only naturally-generated examples may have one.

The Vectre has excellent acceleration off the line, but quickly loses momentum and does not reach a very high top speed. To counter this, it displays very good handling and impressive stability through corners, easily being able to outmaneuver other Los Santos Tuners cars such as the Jester RR and Euros. However, the Vectre is also a very heavy car. Combined with the average brakes, this can lead to understeer during hard braking and through very sharp, low-speed corners. While easy to drive from the get-go, to really get the most out of the Vectre, consistency and careful management of momentum is required.

The Vectre is powered by a low-burbling V8 engine, coupled to an 8-speed gearbox in a front-engine, four-wheel-drive configuration (30% front, 70% rear). Its engine sound is shared with the XA-21 and the Jugular. 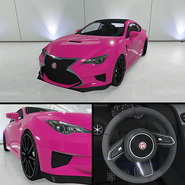 The Vectre on Legendary Motorsport.

The Vectre in the cinematic preview on Rockstar Games Social Club.

Vectre-themed mural art, which can be seen inside the Auto Shop if the "Super Chibi" style is applied.

Advert during the Gunrunning Event.