Artwork of Vasquez arresting a woman.

Shari Albert
“I see you!”
— Vasquez before getting killed.

Vasquez serves as a police officer in the Los Santos Police Department, but later became corrupt. According to the 2 stripes on her uniform she is the rank of Police Officer 3, the real life LAPD equivalent of corporal.

Vasquez appears in Crooked Cop where the GTA Online Protagonist must chase her and take the evidence. This is her only known appearance and she must be killed to retrieve the briefcase. In the Enhanced Version, she is replaced by Officer Jernigan in this mission. 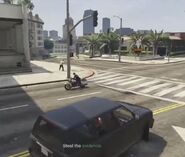 Vasquez as she appears in Crooked Cop