The Varrios Los Aztecas (a.k.a. "Aztecas", "Southerners", "Southside Aztecas", or "VLA") are a gang featured in Grand Theft Auto: San Andreas, as the secondary group of protagonist gang.

The Varrios Los Aztecas have been around since the early 1980s, and are one of the more recently formed gangs in Los Santos. Much of their origins and past history is unknown. Likewise, the origins and past of their rivalry with the other Los Santos gangs - particularly the Los Santos Vagos - is also unknown, though it obviously began sometime between 1980 and 1992. It is highly likely that they evolved from the El Corona neighborhood, and their presence grew with the increase of Mexican and other Hispanic/Latino immigration to the area, correlating with the relative deprivation of the area compared to the rest of the city.

The Varrios Los Aztecas are not a major part of the story, but are first mentioned during Sweet & Kendl in which Sweet refers to Kendl's relationship with a high-ranking Azteca member - Cesar Vialpando, stating "you know we beefing". Because of this, the gang acts as a fulcrum point between the relationship of Sweet and his sister due to Cesar being Kendl's boyfriend - much to the dismay of Sweet because to Cesar's involvement with the VLA.

The radio in the early game mentions that the Aztecas were in a war with the Vagos in East Los Santos, despite the area actually being controlled by the Ballas.

They are first seen during the mission Cesar Vialpando. Sweet orders CJ to follow his sister to a lowriding club at Unity Station, where a lowriding competition with a high concentration of Azteca gang members is taking place - including Cesar Vialpando himself. Fortunately, the Aztecas do not harass or fight CJ and let him take part in the bouncing competition against an Azteca member. CJ wins the competition without any violence taking place and is then introduced to Cesar Vialpando - Kendl's boyfriend. CJ makes his objection to the relationship clear, and an influential (possibly an OG) Azteca member called Jose approaches CJ and confronts/insults him for his rudeness. Fortunately, Cesar is able to influence Jose to "cool down", thus causing him to leave and possibly saving CJ's life. From this point on, Cesar and CJ start to develop a close friendship though the gang violence between the Aztecas and Grove Street Families doesn't decrease.

It is likely that the Aztecas have no involvement with C.R.A.S.H. like the other three Los Santos gangs. This is because the Aztecas never show-up to rob the weapons train during the mission Catalyst, where as the other three gangs were tipped off by CRASH about the train. This is odd since the Aztecas are heavily involved in arms dealing/gun running. Either CRASH are scared of the Aztecas due to them being possibly the most heavily armed gang in Los Santos, or they avoid them because they mistakenly think they are weak due to their small size. Another possibility for this is because CRASH does not want to make the VLA too powerful over the other gangs by equipping them with even more weapons (due to them already being heavily armed). CRASH reveals this mentality to CJ during the mission Gray Imports by stating "if one tribe gets an unfair advantage over another, that truly troubles me Carl!".

However, upon the completion of the mission The Green Sabre, the Aztecas lose all of their territory and influence to the Vagos - including El Corona, Unity Station, and Little Mexico. Remaining Aztecas are killed or in hiding while Cesar is far away from Los Santos aiding CJ and Kendl.

Throughout the rest of the middle game, the Aztecas make no appearances.

Upon the return of CJ to Los Santos, Cesar and the Aztecas regain back their territory from the Vagos in a gang war amid citywide riots with the help of CJ and some Grove Family members during the mission Los Desperados. This mission also introduces the other three known Azteca OG's - Gal, Sunny, and Hazer. This is the only known situation where the Families and the Aztecas join together briefly to take down the Vagos.

The Varrios Los Aztecas are an extremely proud Mexican/Latino street gang, and they control El Corona, Little Mexico and Unity Station. They are the smallest gang in the city but are likely to be one of the most heavily armed, giving them power over the other gangs. They are a traditionally anti-narcotic gang like the Grove Street families, with heavy involvement in gun running/arms trafficking, gang-banging, gang warfare, street violence, gang-related homicide, murder, vandalism, and illegal street racing. They are easily identifiable by their turquoise colored bandanas and 90's "cholo" style clothing.

The Aztecas have a fierce rivalry with the Los Santos Vagos, and strongly dislike the San Fierro Rifa. They also have many conflicts with the nearby Ballas (especially the Front Yard set) since their territories border near Idlewood. The Aztecas are also enemies with the Grove Street Families and will attack Grove members on sight though the rivalry is not as intense as it is with the Ballas and especially the Vagos since the families are well away from their territory, and since they both share similar views on drug trafficking.

Aztecas will more commonly question CJ about his gang banging status rather than directly shooting him on sight like the Ballas would. If the player chooses to respond positively, CJ will announce he is from Grove Street and the Aztecas will attack. Aztecas members will be hostile to Carl only if he walks on their territory. If he drives a car through their turf, they will just stand on the street and won't even chase hím or shoot at his car. This indicates that the Aztecas and GSF have a lighter rivalry, as opposed to the Ballas and Vagos, whom the GSF are arch-enemies with.

Despite the rivalry between the Aztecas and the Families, two prominent OG's/high ranking members bond a close friendship - Carl Johnson (Grove Street) and Cesar Vialpando (Aztecas) due to Cesar dating Carl's sister Kendl - though this is much to the dismay of Grove Street leader Sweet whom quotes at the beginning of the game "you know we beefing" in relation to the rivalry between the two gangs. The friendship of Carl and Cesar is further fueled when they eventually leave behind the gang-banging lifestyle. Hence, despite the fact that Cesar is a friend of the protagonist, this gang will still confront and/or attack CJ if he walks on their turf.

Unity Station acts as a front for the gang and is a common meeting place, aswell as being the place where their lowrider competition takes place. VLA members are mostly dressed in the 90's 'cholo' (Mexican gangster) style clothing of the time and turquoise bandanas are a dead give-away and they will often mark their territroy with graffiti. Members are found hanging around and talking in groups while smoking marijuana and drinking malt liquor. Upon spotting a Balla, Grove, and especially a Vago or rarely a Rifa member on sight - they will engage in a violent confrontation. Aztecas can also sometimes be seen flashing their gang handsigns.

On the streets, they are either unarmed or armed with the 9mm Pistol or the Micro SMG. Since they carry the Micro SMG on the streets along with an RPG, Tec-9, and Katana in the mission Los Desperados, they are actually better armed than their primary enemy - the Vagos, though the Vagos are much larger and have more territory while the Aztecas are the smallest gang in Los Santos - suggesting that they are probably on equal power.

The Aztecas drive the Broadway, the Glendale, and the Hermes. Their favourite radio station is Playback FM.

The VLA have three different skins that will walk and drive around their territories.

Gal, Sunny, and Hazer are likely the gang's OG's who assist Cesar and Carl to recover some of their lost territory during the mission "Los Desperados" towards the end of the game. Jose is also possibly an OG/high ranking member, who is introduced during the mission "Cesar Vialpando". The game never explains Cesar's status in the gang. He could be the leader or a high-ranking OG. It is more likely that he is a high-ranking member and not the leader due to his influence over Jose and his overall respect. If he was the leader, it is unlikely he would befriend CJ, ask for the Grove Street Families' help during the mission Los Desperados, or date Kendl.

The Aztecas are traditionally heavily into cars and the lowriding culture and "hopping" or hydraulics usage as part of their gangs identity and past-time. They have a betting competition known as the Lowrider Challenge. It can be found at Unity Station after talking to the mechanic just outside of the east wall of the station's parking lot.

Unlike the other gangs, the Aztecas don't primarily seem to be concerned with "branching out" or starting businesses/relationships (except for arms running/dealing) like the Vagos/Ballas willingness to engage in the crack trade or the Grove Families willingness for territory/expansion. Instead, they seem to be more locally focused by exclusvely representing and defending their "barrio".

Interestingly, unlike the Ballas and the Grove Families; the Aztecas are not divided into different sets - and are formed as one large gang instead. This is probably due to their small size: the different sets make it easier to organize large gangs, while the Aztecas wouldn't necessarily have that problem.

Due to a glitch, it is possible for the Varrios Los Aztecas to attack Grove Street territory. First, the player will have to wait for some Ballas to attack the hood. When the territory is attacked, the player will need to lure 3 Ballas gangbangers into El Corona or Little Mexico, kill them there and then drive to the attacked hood. The player will see blue points on the map, either Glendales, Broadways or Hermes blocking the turf and the Varrios attacking it. 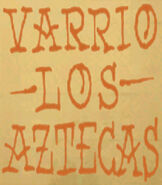 The graffiti used for the Varrio Los Aztecas.

From left to right: Hazer, Sunny, Gal and Cesar. 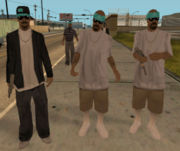 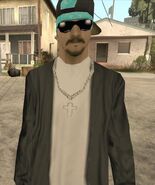 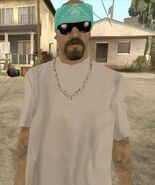 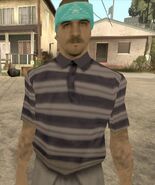 Close-up view to the faces of two beta Aztecas.