watch 01:56
What is The Vanilla Unicorn?
Do you like this video?
Play Sound

"Chain of topless bars rebranded as 'gentleman's clubs' to make middle-aged men feel better about the direction their lives have taken."
— Description at LCN.com.

The club is located on Elgin Avenue, next to the Olympic Freeway in Strawberry, Los Santos, State of San Andreas.

It has several sections, some known are the Real Class, and Beautiful Ladies Class. The club itself is divided into a stage (resembling a penis, another example of Rockstar's crude humor), bar, private rooms, a small office and the stripper's dressing room. The latter keeps a large snake as a pet, which will not move in any case.

Franklin is seen in the club during his personal trailer, hanging out with Lamar. He seems to be friends with the bouncer/doorman since he always greets Franklin as "Mr. C". The doorman will also recognize Michael after Hang Ten, suggesting they visit the club frequently, especially to see Trevor and plan the Union Depository heist. Following Hang Ten, Wade Hebert can be found in one of the booths near the entrance, being fawned over by two strippers.

The music heard inside Vanilla Unicorn is from Non-Stop-Pop FM. In the enhanced version, the music heard inside is taken from various radio stations. As with all other radio stations in the game, only 10 or so songs will play on a randomized loop. Wade may comment on the small song selection if the player walks by him where he will comment, "They only play like, six songs in here. It's kinda making me crazy."

The club is a frequent Families gang hangout location, as it is located deep in their turf in Strawberry. Members can be seen standing outside the club and there is always a member sitting by one of the tables near the bartender.

In Grand Theft Auto Online, the strip club is locked until level 6.

The strip club has a website on the in-game internet at www.vanillaunicorn.xxx.

The club name is a play on the real-life strip club chain Spearmint Rhino, as both names contain a flavor and an animal with a horn on its head (though fictional in this case).

Also, judging by the club's location in Strawberry and its exterior, the building seems to be based on the real life strip club Bare Elegance.

"For the finest girls in Los Santos visit the Vanilla Unicorn - Objectifying the female form since 1984."
— Text message the player receives upon reaching rank 6 in Grand Theft Auto Online.

In the strip club, the player can pay $40 (pocket cash only) to receive a topless dance in private. The protagonist can flirt with the stripper or touch her to increase a "Like" meter. However, there is a bouncer in the private room that walks back and forth, and if the bouncer catches the protagonist touching the dancer three times, the protagonist will be kicked out of the club. If the protagonist likes her enough, he can choose to take her home, similar to the girlfriends in Grand Theft Auto IV. Additionally, the strippers will be added to the characters' cell phone contacts, much like the women met in the Maisonette 9 from The Ballad of Gay Tony, and can be taken home without receiving a dance first. However, some strippers do not sleep around.

After Trevor acquires the Vanilla Unicorn, he, Michael and Franklin can touch the strippers without the risk of being ejected. For Trevor, lap dances are free and the strippers call him "sir".

After a stripper is taken home for the first time, her number will be available on the contacts list on the player's phone. The player can then call her at night to pick her up and take her home, but if called during the day she will make an excuse. She will usually send pictures of herself to the player too after being taken home. Sometimes when picked up, strippers will give the player a blowjob while he is driving her home. This can easily be noticed by pressing the button to look behind while driving, as well as the comments made by her and the player.

If a stripper is attacked or killed, either at the club or in transit during a booty call, she will be alive and well during her next shift at the club. She will, however, be mad at the player; they will have to restore her "like" bar in order to re-acquire her as a booty call. Also, in GTA V, when taking a stripper home, the stripper will get mad and leave the player when it looks like they're leaving her behind.

In Grand Theft Auto Online, the player can get a lap dance, again for $40, only there is no bouncer in the area of the private rooms and they can hold the stripper without the worry of being kicked out. They once again must raise a Like bar, which can be worked on by tossing dollar bills during the stripper's pole dance, holding the stripper during lap dances, or using their microphone to flirt with the stripper. Filling the flirt bar will add a bit to the Like bar at a time. Most of them also have their voice lines disabled, unless they have unique lines that are not gender-specific.

If particular strippers with whom their Like meters are high enough, are working at the time and a private dance is purchased for one of them, the game will inform the player that there is a girl available that the stripper is willing to dance with (a double lapdance), and they need to be asked to join before entering the private rooms. The second dancer will need to be paid as usual before she agrees.

If the player wishes to max out the Like meter, it must be done in one session as it is reset with every new session.

Once the Like bar is full, the stripper will give the player her number and if rung, she will come to the player's apartment (the more high-end it is, the better) to perform free lap dances in a predesignated armchair (though not topless) for the player and their friends. Only one stripper at a time can be invited over.

When not performing, she will stand by the chair and dance in place. As long as a player is in range and able to activate a lap dance she will stay. If the mobile phone is active or a player is not in range, she will ask for interaction until an in-game notice warns that she will leave if she becomes bored from being ignored. Once she reaches that point, she will say goodbye and simply walk out of the apartment.

For some reason, topless dances could not be received in Grand Theft Auto Online, even though it is described as a topless bar by Lcn-exchange.com. Additionally, only Nikki, Chastity, and Fufu worked in the club in GTA Online in the original version. These issues were changed in the Enhanced Version in patch 1.27, however.

The strippers currently working at the club are:

Following "Hang Ten", Trevor "acquires" the Vanilla Unicorn as a safehouse, replacing Floyd's Apartment, which loses its function as a safehouse in the mission. Once acquired (at no cost to the player), Trevor can roam freely around the backrooms of the club, and is also able to get lap dances for free and touch the dancers at will (Franklin and Michael also can now touch freely, but still have to pay).

This is one of five safehouses in Grand Theft Auto series to be given to the player after killing the owner, the others being the Vercetti Estate, Brian Jeremy's Safehouse, Lancaster Safehouse and the Playboy X's Penthouse.

Other features of the club-as-safehouse:

Unlike other safehouses, if Michael or Franklin fires their weapon inside or at the parking after Hang Ten, Trevor will not call or text them to stop.

Have an unforgettable bachelor party at the Vanilla Unicorn. We supply party hats, jimmy hats, and antifungal cream. Just don't forget your Fleeca card, cause we'll max it out!

So you can stay connected with your favorite dancers as they beg you to come back and spend more of your kid's college money on trolips.

Ready to eat? What better way to impress hot women than by whispering sweet nothings in her ear and shoving 20s into her g-string while you're covered in hot wing sauce and blue cheese dressing.

Think you have what it takes to work at Los Santos's most popular, legendary gentlemen's club? Look down; do you see a pair of fake tits? Is your head empty? You're halfway on your way to a career in taking men's money while not putting out.

View from the stage.

Strippers' dressing room.
Add a photo to this gallery

Trevor in the Vanilla Unicorn.

A reference to Jimmy Hopkins, the protagonist of "Bully," a game also made by Rockstar.

The snake in the dressing room.

A fish tank at bar in Vanilla Unicorn. 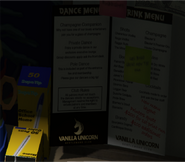 A beer cooler at the bar in Vanilla Unicorn. 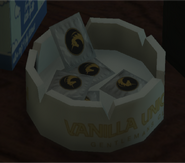 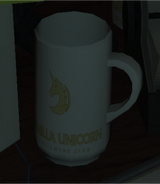 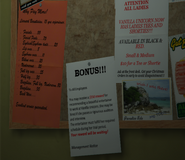 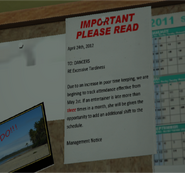 Vanilla Unicorn notices #3.
Add a photo to this gallery

Retrieved from "https://gta.fandom.com/wiki/Vanilla_Unicorn?oldid=1326553"
Community content is available under CC-BY-SA unless otherwise noted.