Standard White - 100%
“Believe it or not, the Vamos began life in 1960 as a sensible, affordable compact car. But over the course of the decade, something wonderful happened. It moved out of its parents' house and started hanging around with V8's and fastbacks. Its wheelbase lengthened, its grille expanded, and its hood got so long and flat you could spend a whole summer of love on it. These days, it's exactly the kind of bad influence you were looking for.”
— Southern San Andreas Super Autos description.

The Declasse Vamos is a muscle car featured in Grand Theft Auto Online as part of the continuation of the Arena War update, released on February 14, 2019, during the Valentine's Day 2019 event.

The Vamos is a mix of the few Chevrolet Novas. It is primarily based on the third generation Chevrolet Nova, seen in the body style, headlights, tail lights and greenhouse area. The front and rear bumpers bear resemblance to the second generation Nova, and its grille comes from the fourth generation Nova. The indicators on the side of the headlights might also be inspired by the Chevrolet Chevy Malibu. The taillights seem to be inspired by either the Pontiac Ventura or Plymouth Gran Fury.

In terms of design, the Vamos follows a similar profile to vehicles like the Buccaneer and the Impaler, where the front end is quite dominated by the bulky bumper with riveted details on the lower area and the sides, two open sections beside the license plate and small amber lights on the outer edges, before reaching the protruding ends of the bumper. The upper area features a large grille with rectangular lights behind them and square-shaped housings for the circular headlights, along with sectioned amber lights on the outer edges. The hood area is relatively simple, with an angled front end and protruding edges.

The sides of the car are mostly flat, with a slightly flared profile on the wheel arches and a trim running across the sides, with a detail on the bottom and circular rear-view mirrors on the doors. The greenhouse area is relatively simple, with thin inner pillars and slanted rear. "396ci" badges can be seen on the front, while the corresponding manufacturer badges can be seen on the rear, just over the side detail.

The rear of the car is traditional, featuring a large trunk with a detail on the center, followed by a black panel and the rectangular tail lights on the rear end. The rear bumper also has the same riveted details and the central license plate as on the front, albeit the rivets are located in the upper area. The manufacturer badge can be seen on the center of the black panel, along with a cursive badge on the passenger side displaying the car's name. Two exhaust pipes can be seen below. The interior is shared with muscle cars like the Dominator.

The bodywork and the engine cam covers are painted with the primary color, while the bumpers, trim and details around the car are painted with a secondary color. The rims appear to be a derivative of the "Old School" muscle rims available in Los Santos Customs, but the center of the rim does not have the details seen on the aforementioned custom rims. These rims can also support a dedicated color, although only examples generated in Content Creator are painted in black.

The Vamos is notorious for its high spin-out, often losing control at higher speeds if not maintained carefully. As a result, it doesn't fare very well when driving through congested traffic. In addition, if the car is launched airborne, the Vamos will often land awkwardly. While the Vamos can be given full suspension upgrades as to negate this effect, its steering is still very sensitive and has bouts of spinning out very easily. The Vamos has a tendency to roll over on its side when executing a tight handbrake turn at high speeds. Durability is good, though repeated impacts can cause drastic issues to the vehicle.

The Vamos is stated to be powered by a 396ci (6.5L) engine, with the model being a single-cam V8. This engine is coupled to a 4-speed gearbox and powers the rear wheels, with a distinctively loud engine sound similar to the ones used in the Tulip and the Imperator, with a lower pitch. Installing an "Exposed Turbo Grille" modification adds one or two fully-animated turbochargers, though this is purely cosmetic and does not increase performance unless the actual "Turbo" modification is installed, while installing a "Bug Catcher/Ram Pipes" modification add a supercharger. 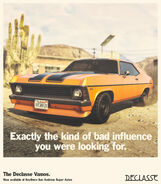 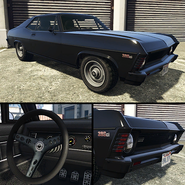 The Vamos on the updated Rockstar Games Social Club.

The Vamos in the cinematic preview on Rockstar Games Social Club. 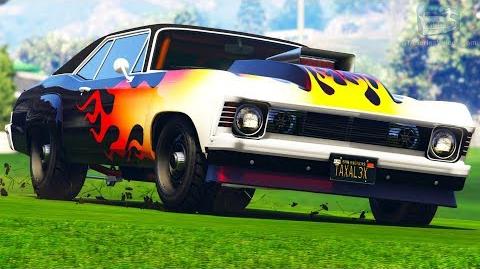