Standard White - 100%
“Instantly recognizable to any connoisseur of military-themed action movies, the Valkyrie has more Vinewood credits to its name than Jack Howitzer. One of the few survivors of the 1960s war effort that the American government is still willing to invest in.”
— Warstock Cache & Carry description.

The Buckingham Valkyrie (pronounced Valk-er-ee) is a military transport helicopter featured in Grand Theft Auto Online as part of the Heists Update.

The Valkyrie is mainly based on the Bell UH-1Y Venom, a four-bladed, modernized version of the American Bell UH-1 Iroquois "Huey" utilized by the United States Marines. However, unlike the UH-1Y, the exhausts are very close to each other, similarly to a Bell 212/412 and features a Fenestron tail rotor from a Eurocopter Dauphin or Kamov Ka-60, which has a similar empennage.

The Valkyrie is a rather large helicopter that features a rounded nose, large windows and access doors, as well as a lower section that mounts a frontal turret. On the middle section, there is a large engine compartment with the corresponding intakes on the front, the dual exhausts on the rear and the main rotor with a circular hub on top of the blades, while the lower area consist of an open bay with non-interactive cockpit doors, a lower structure extending to the sides of the helicopter and black skids. The tail boom and empennage are relatively large as well, featuring tall fins on the horizontal stabilizers and a tall vertical stabilizer, housing a fenestron tail rotor with numerous blades and circular hubs. The aircraft features black markings around the fuselage and may have one of the following decals on the nose: a white spade, a pinup model with the caption "Miss Zancudo", or a pinup model bending over with the caption "Come & take it".

The interior of the aircraft is relatively large, featuring a wide instrument panel and an open section leading to the rear bay. The same bay features vertical frames and side-facing seats for the rear passengers/gunners. In the enhanced version, it uses the same "Flyer" dials as the Maverick and Police Maverick, and shares the same arrangement with the Annihilator.

The aircraft only spawn in a dark grey primary color around the fuselage and a black secondary color on the nose, up to the windshield and the doors.

The vehicle is equipped with port and starboard mounted Miniguns seemingly based on the GAU-17/A minigun, as well as a four-barrel gatling gun on the nose, which appear to resemble a Yakushev-Borzov YakB-12.7 mm machine gun. 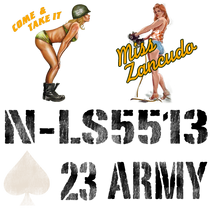 The Valkyrie has an above average speed at 140 knots, making it slower than the Swift, but slightly faster than the Buzzard and the Buzzard Attack Chopper. It is quite maneuverable and is capable of turning quickly, which is useful in aerial engagements when the Valkyrie's port and starboard gunners need to aim. While flying forwards with full power and fully pitched forwards, the helicopter will descend very slowly. The helicopter also has a slight rightward list, which affects the aircraft during all modes of flight.

The aircraft is powered by twin turboshaft engines, which produce a traditional sound shared with most civilian aircraft, most notably the Frogger due to the four-bladed main rotor.

Like most civilian aircraft, the Valkyrie is quite fragile, as its engines will begin to smoke after a short amount of small arms fire to any part of its fuselage or instantly destroyed by a single grenade, bomb or rocket. The explosive rounds from the Heavy Sniper Mk II can make short work of the helicopter, needing only two or three hits to destroy it. Despite the aircraft's model having a fenestron tail rotor, the rotor can still be shot and destroyed, unlike the Frogger, FH-1 Hunter, or Akula.

While the helicopter has good maneuverability, it is still rather large, leaving little room for error while avoiding enemy homing missiles. While more difficult than with a Buzzard Attack Chopper, it is still feasible against the Homing Launcher.

Alone, the pilot cannot control any of the crew-operated weapons, but with a well-coordinated team, the Valkyrie can pose a major threat to any air or ground units.

Upon being converted into a personal aircraft, the Valkyrie can be repainted with a primary and a secondary color. The player cannot remove the random nose decal, although the player can request another Valkyrie through Pegasus until they find a version without any decals on. However, due to a bug, the decal will despawn from the vehicle once the player switches servers.

A screenshot of the Valkyrie during the Heists trailer.

Rear of the Valkyrie.

A gunner using the mounted minigun.

A gunner firing at a Frogger.

An image of the Valkyrie behind Agent 14.

Close-up of the decals and exhausts.

The Valkyrie in the Original Version of GTA Online. (Rear quarter view)

Front view of the Valkyrie in GTA Online.

The Valkyrie in action during The Humane Labs Raid. 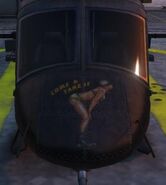 "Come and take it" nose art. 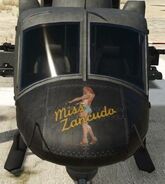 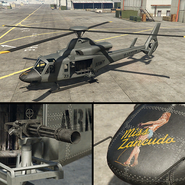 The Valkyrie on Warstock Cache & Carry.

The Valkyrie on Rockstar Games Social Club, depicted with a different weaponry.

The Valkyrie on the updated Rockstar Games Social Club.

The Valkyrie in the cinematic preview on Rockstar Games Social Club.

Close-up on the minigun.

The Minigun in first person.