GTA Wiki
Register
Don't have an account?
Sign In
Advertisement
in: Asset Missions, Missions in GTA San Andreas, Side Missions

View source
watch 03:01
Wiki Targeted (Games)
Do you like this video?
Play Sound
“The ultimate American dream - get someone else to park your car.”

The Valet missions are a series of side missions in Grand Theft Auto: San Andreas. These missions are triggered when Carl Johnson walks into the red marker at the front of the Vank Hoff Hotel in Financial, San Fierro, just north of the Big Pointy Building, only when wearing the Valet Uniform. The side mission and uniform are only available after completion of the mission 555 We Tip.

The objective is to collect a hotel patron's vehicle from the front of the hotel (they will drive into the driveway) and drive it round to the underground parking lot. The player will get a time bonus for every car in terms of parking the car well aligned into the designated spot and keeping it damage free.

Other valets are also present, who will collect cars if Carl isn't quick enough to get to them first. These valets can be killed to remove the competition, although with a -20 second penalty per valet killed.

The total reward for completing all levels is $1,500 (the sum of the bonus of each level). The Vank Hoff Hotel Valet Service also becomes an asset, and would generate a maximum of $2,000.

The Vank Hoff Hotel is located directly between the Victim and the The Well Stacked Pizza Co. in Downtown San Fierro. Alternatively, it is also possible for the player in following the trolley tracks to the hotel, as they run right by the cul-de-sac where the mission begins. 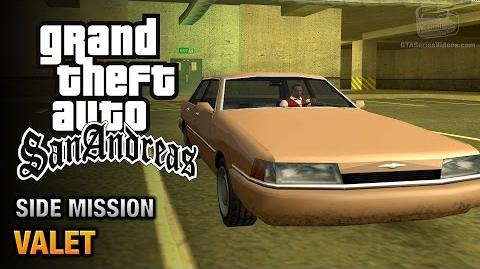 A car waiting to be parked.
Community content is available under CC-BY-SA unless otherwise noted.
Advertisement