Standard White - 100%
“Quit your job. Sell your house. Leave your kids. Choose freedom. The Vagrant from Maxwell Motors - it's an off-road buggy and a lifestyle. Because nothing feels as free as being in a lightweight polyethylene cage hurtling over sand dunes and tumbling down hillsides. So what if your life expectancy in one of these is measured in minutes - it's time to abandon responsibility and live recklessly.”

The Maxwell Vagrant is an off-road buggy featured in Grand Theft Auto Online as part of the The Diamond Casino Heist update.

The Vagrant is evidently based on the Ariel Nomad, given the overall shape, wheel fenders and headlights (although rearranged in a triangle setup, opposed to the Nomad's linear setup).

The vehicle assumes a similar layout to the Dune Buggy and the Bifta, but has a more modernized bodywork that is predominately finished in black. The front end of the buggy has a small bullbar that protects a small intercooler with a fan on it, while the outer portions mount a set of three circular lights arranged in a triangular setup, consisting of the outer main lights, the inner high-beam lights and the lower indicators. On the upper side, there is a small compartment that bears the Maxwell logo on the front and can be opened (labeled as the "trunk" in the Interaction Menu), while the sections beside it have protruding shapes, where the suspension springs are located.

The cabin area is relatively tall and wide, having the corresponding windshield and two small mirror wings on the front, as well as two additional frames on the roof area. The same cabin is mostly exposed and lacks any sort of doors or panelling around, other than the plastic fenders on the wheels.

On the rear, the buggy has a black upper panel with the Maxwell logo and lettering on the end, together with a painted engine compartment that barely opens (likely to make room for the "Roof" options) and protruding sections on the outer sides, where the suspension springs are located. Directly within the rear section, there is the engine bay with the corresponding exhaust system, which leads to the passenger side and towards a large muffler located below the aforementioned panel, before splitting into two small tips located on either side of the same muffler. Either side of the rear are twin circular tail lights, each one consisting of outer brake/turning lights and inner main lights, with white outer rings on the inner set that work as the reverse lights. The bottom area of the rear has a license plate and an exposed bullbar acting as the rear bumper.

The underside of the vehicle is mostly plated, with the hoses of the front intercooler and the brakes partially exposed. The wheels have the corresponding control arms connected to the main body, as well as the steering rack on the front, the drive shafts on the rear and the support frames for the fenders.

The cabin compartment shares the same dial set and features as most race vehicles like the RE-7B and the ETR1, having a carbon-fiber dashboard, numerous switches around and a digital display with RPM indicators below, as well as steel flooring and carbon-fiber seats with race seatbelts. The steering wheel also bears the Maxwell logo on the center.

The primary color of the vehicle is applied on the front compartment and the rear engine compartment, while the secondary color is applied on the external roll cage and the protective frames. A trim color is also available for the suspension springs and the overstitches of the steering wheel. It uses a set of rims similar to the ones from the Landstalker, being identical to the "Challenger" off-road wheels seen in Los Santos Customs. High-profile tires are fitted as standard. 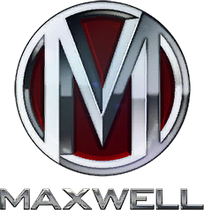 The Vagrant is very competitive in its class, possessing excellent acceleration and top speed. Top speed is high in its class, letting the vehicle compete with other fast off-road vehicles such as the Sanchez. Handling is responsive, allowing the vehicle to make quick turns. Traction is good, keeping the vehicle on the ground. Braking is good, taking only a short distance to come to a complete stop.

As with the design of the Vagrant, it has excellent off-road capabilities. Its suspension allows it to go over small rocks and the terrain with ease, making it great for off-road racing. The powerful engine allows it to climb almost any slope with ease. The downside of the Vagrant is that it is rather light, owing to the design of the vehicle. This makes sorting out traffic a problem as hitting vehicles can make it stop completely.

The vehicle is powered by what looks like a V-shaped engine, with the textures exposing six outlets on either side. However, the exhaust system seems to originate directly from the center, with no defined manifolds to prove its exact configuration. It has a 6-speed gearbox and a rear wheel drive configuration, and emits a sound that is similar to cars like the Stinger, the Stinger GT and the Issi Classic. 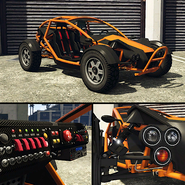 The Vagrant in the cinematic preview on Rockstar Games Social Club. 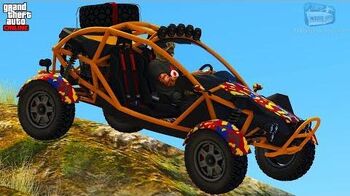 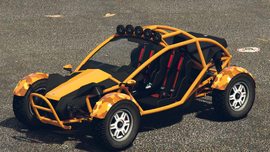 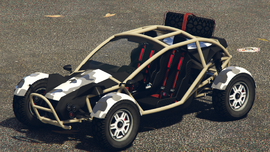