Standard White - 100%
“This is what you get when you start from a truly blank slate. Take every preconception you had about hypercar design: every piece of received wisdom, every rock-solid assumption, every tried and tested formula - take them all and dump a hot, steaming pile of filthy ingenuity all over them. The Vagner is a message from the future: you're late.”
— Legendary Motorsport description.

The Dewbauchee Vagner is a prototype hypercar featured in Grand Theft Auto Online as part of the Gunrunning update, released on June 30th, 2017, during the Independence Day 2017 event.

“The Vagner is a message from the future: you're late.”
— Rockstar Newswire description.

The Vagner is distinctive by its lightweight bodywork and sleek cockpit design, where the front end has an elevated profile and mounts a carbon-fibre diffuser/wing, which has two additional blades on the outer sides and four support frames; two larger ones on the centre and two smaller ones on the edges. Directly above the additional blades are two intakes intended to direct airflow to the front brakes, followed by modern strips between the intakes and the bodyline that defines the bumper area from the rest of the car. On the upper area, the car has black vertical housings placed over the rounded fenders, where each housing has four sectioned headlamps and a vertical turn signal in between, with the two outer lamps working as the main ones and the inner ones as high-beam lamps. The bonnet area is relatively flat compared to the fenders, having an impressed area on the centre that houses a carbon-fibre plate near the windscreen and the manufacturer emblem on the front.

The sides of the car denote its aerodynamic profile, featuring inset formations finished in carbon fibre and passing through the gull-wing doors, directing airflow to the intakes on the rear and two smaller ducts on the doors. The front area has flat skirts bearing silver "DEWBAUCHEE" lettering near the front wheels, while the rear area has blades similar to the front end and extend a bit further from the bodywork. The cockpit is relatively rounded and narrow in comparison to the rest of the car, which is mostly finished in carbon-fibre and has a seemingly long windscreen, with the roof area having the corresponding separations on the doors. Directly behind the cabin area, there is a coloured section that separates it from the engine bay, followed by a triangular section that is also finished in carbon fibre and bears a single compartment with a rear window, which exposes the engine bay marked with silver "DEWBAUCHEE" lettering. Again, the rear section is seemingly flat in comparison to the rear fenders.

The rear end of the car features a flat carbon-fibre plate that follows the same alignment as the rear flat section, holding a set of triangle-shaped lamps above the edges and the central manufacturer emblem on top, together with a single red strip on the end of the plate. The area below the plate consist of two rear exit vents on the edges and a smaller one on the centre, with the separations housing small reverse lamps. Like the front area, the rear has an elevated profile and houses quad-exit exhausts surrounded by a silver detail. The entire underside of the car is carbon-plated, with the corresponding elevations on both ends and having protruding formations on the middle and rear sections, with a central one intended for the exhaust tubes. There are small gaps on the sides defining the aforementioned side skirts, as well as carbon-fibre arms connecting the front wheels.

The interior of the car is shared with the X80 Proto, using the same dial set and carbon-fibre details around. However, it appears to be slightly narrower, evidenced by the smaller spacing between the dial panel and the cabin's A-pillars. The manufacturer emblem can be seen on the horn cap.

Most of the car's bodywork is painted with the primary colour, while the separation on the roof is painted with the secondary one. A trim colour is also available for the interior, being applied on the dashboard, part of the doors, the inner portions of the seats and the stitches, as well as an accent colour, for the trims found around the sides, rear and underside. Similar to vehicle like the ETR1 and RE-7B, the Vagner features racing slicks for the stock rims, with the rims being similar to the "Mercie" rims seen in Los Santos Customs. These rims can also support a dedicated colour, which is set to black in both naturally-generated and purchased examples, but for the latter case, they will reset to the default alloy colour if the wheels are changed.

The Vagner is one of the fastest cars available in the game, possessing great top speed and very good handling. The low suspension gives the car great stability when turning into a corner, however the back end can be prone to lose control if going over a significant bump. The Vagner's decent acceleration allows it to move quickly after taking a turn correctly, which can be an advantage on tracks with many low speed corners. However, the Vagner's acceleration is not as efficient or consistent as other supers such as the Osiris and Tempesta. Thanks to downforce and the bump taking ability of the Vagner, the car can take very fast corners at speeds incomparable to most other supercars. However, supercars such as the Tempesta and Zentorno are better at taking slower corners and hairpins. On a straight line, the Vagner is competitive, having a higher top speed than the regular Nero but lower than the Itali GTB Custom.

Statistic-wise, the Vagner rivals the X80 Proto. The X80 is AWD while the Vagner is RWD, resulting in less understeer overall. It also has good grip in high speed corners due to the downforce. However, this is insignificant in slower corners when the Vagner's downforce statistic results in less cornering grip. Brakes are slightly stronger on the Vagner than the X80. The Vagner has higher traction statistics as well compared to the X80. Lastly, the Vagner weighs 100 kg more than the X80. Both cars can clip curbs.

The engine cover/cam cover design is reused from the Furore GT and Rapid GT, appearing to be a V8 engine. The engine sound can be said to be similar to that of the X80 Proto, but with a higher pitch, and that of the Specter. Because of the high power of the engine, and the excessive amount of revolutions per minute, the car tends to backfire when downshifting. Constantly hitting the brake when at high speeds can result in large backfires which have a louder sound than any other backfires on vehicles.

When purchasing a Vagner, the default color options available on Legendary Motorsport will apply slightly different colors compared to regular vehicles. This preset gives the vehicle a Stone Silver secondary color regardless of the color chosen. It also adjusts the vehicle's pearlescent and wheel colors and assigns the vehicle a dial color which is applied to various trims, including within the diffuser and along the side intakes. 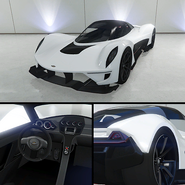 The Vagner on Legendary Motorsport.

The Vagner in a promotional advert in 2020.

The Vagner on the updated Rockstar Games Social Club.

The Vagner in a Cinematic preview on Rockstar Games Social Club. 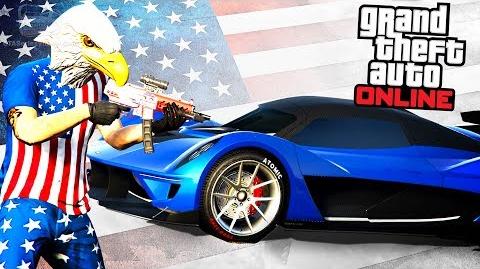